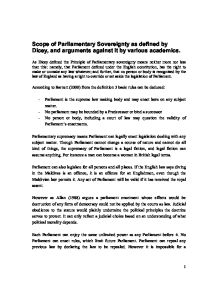 Scope of Parliamentary Sovereignty as defined by Dicey, and arguments against it by various academics.

Scope of Parliamentary Sovereignty as defined by Dicey, and arguments against it by various academics. As Dicey defined the Principle of Parliamentary sovereignty means neither more nor less than this: namely, that Parliament defined under the English constitution, has the right to make or unmake any law whatever; and further, that no person or body is recognized by the law of England as having a right to override or set aside the legislation of Parliament. According to Barnett (2000) from the definition 3 basic rules can be deduced: - Parliament is the supreme law making body and may enact laws on any subject matter. - No parliament may be bounded by a Predecessor or bind a successor - No person or body, including a court of law may question the validity of Parliament's enactments. Parliamentary supremacy means Parliament can legally enact legislation dealing with any subject matter. Though Parliament cannot change a course of nature and cannot do all kind of things, the supremacy of Parliament is a legal fiction, and legal fiction can assume anything. ...read more.

However in matters like granting of Independence to colonies, as Lord Denning states 'freedom once given cannot be revoked'. According to Sir Ivor Jennings: Legal Sovereignty is merely a name indicating that the legislature has for the time being power to make laws of any kind in the manner required by law. Legal sovereignty may impose legal limitations upon itself, because its powers to affecting itself. He says Dicey failed to prove that the law made the king in Parliament a sovereign law making body. If UK parliament has given legislature powers to South Africa and New South Wales, no control pertains to Parliament of UK. At a lower level, there is granting of limited autonomy, defined by act of parliament and control of courts, whereby local authorities enjoy some self-governance. It is said that, no one may question the validity of an act of Parliament. However Dr Bonham's case in 1610 it was said, when an act of Parliament is against common right and reason, or repugnant, or impossible to be performed the common law will control it and decide such act to be void. ...read more.

Theoretically, the Parliament may remain free to enact laws violating any or all of the United Kingdom's international obligations. But in practice it could not. Today UK as with most states are bound by numerous treaties, under international law, which imposes restrictions on freedom of government action. For instance, protection of human rights and agreements on tariffs and trade. It is also bound by terms of European Union and United Nations. Dicey himself argued that under fundamentally different socio economic and political conditions, may limit the exercise of sovereign power. Due to the increase of powerful pressure groups; there have been occasions where the sovereignty of the government has been overpowered by pressure groups by forcing Parliament to revise laws it has made. An example of this could be in the 1970s when trade unions forced Parliament to amend the 1971 Industrial Relations Act. As Sir Jennings (1959) said, Parliament passes many laws, which people do not want. But it never passes any law which substantial section of the population violently dislikes. Yet if sovereignty is supreme power, parliament is not supreme, but the people. ...read more.