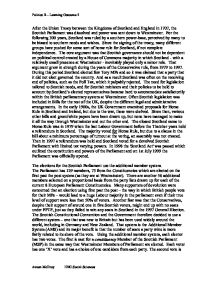 After the Union Treaty between the Kingdoms of Scotland and England in 1707, the Scottish Parliament was dissolved and power was sent down to Westminster. For the following 300 years, Scotland was ruled by a southern power-base, perceived by many to be biased to southern needs and wishes. Since the signing of the treaty, many different groups have pushed for some sort of home rule for Scotland, if not complete independence. The core argument was that Scottish governance should not be dependent on political control created by a House of Commons majority in which Scotland - with a relatively small presence at Westminster - inevitably played only a minor role. That argument grew in strength during the years of the Conservative rule, from 1979 to 1997. During this period Scotland elected few Tory MPs and so it was claimed that a party that it did not elect governed the country. And as a result Scotland was often on the receiving end of policies, such as the Poll Tax, which it palpably rejected. The need for legislation tailored to Scottish needs, and for Scottish ministers and their policies to be held to account by Scotland's elected representatives became hard to accommodate satisfactorily within the British parliamentary system at Westminster. ...read more.

those left at Westminster). These powers that are retained are: * The Constitution - This includes succession to the Crown, changes to the UK Parliament, Honours & Titles. * Foreign Affairs - Membership of international organisations, international relations, regulation of trade and international development are all reserved. Negotiations with the European Union are primarily under the control of Westminster ministers. * Civil Service of the State - Whitehall Officials and UK Judiciary are still to be determined through Westminster. (With the exception of Scottish Legal officers which the Scottish Executive can recommend for Scottish Sheriff Courts etc) * Defence - Westminster oversees Defence of the Realm, the navy, military & air forces. Other Westminster defence powers relate to decisions over international headquarters and defence organisations and what the Act refers to as "trading with the enemy and enemy property". * Fiscal And Economic Matters - Fiscal economic and monetary policy, including the issue and circulation of money, taxes and excise duties, government borrowing and lending, control over UK public expenditure the exchange rate and the Bank of England. * Home Affairs - Some areas such as the Misuse of Drugs Act 1971 and the Data Protection Act 1984 which sets out the law on these issues for the whole of the UK can only be changed by Westminster. ...read more.

But in principle, Scotland will be able to make laws relating to devolved matters even if they also affect reserved matters. Westminster is still able to intervene to stop a piece of Scottish law if that law would: * conflict with an "international obligation" of the UK * damage national security or defence * adversely affect a law that applies to reserved matters The European Parliament has the same control that it had before devolution over its Scottish counterpart - all new laws have to comply with European Community law. The Scotland Act 1998 removed the guarantee of at least 71 Scottish seats at Westminster (there are now 72) and required the Boundary Commission for Scotland to determine the level of Scottish representation by applying the same electoral quota as in England. (At present, the average Scottish constituency comprises around 55,000 electors, while the average for English constituencies is around 70,000.) The Scotland Act also provides for the Scottish Parliament constituencies to be the same as the UK Parliament constituencies, except for Orkney and Shetland which each have their own MSP. The Scottish parliament would also shrink. Since the Scotland Act requires the number of Edinburgh single member constituencies to balance the number of PR seats in the ratio of 73:56, that would cut the parliament's size from 129 members to 106. ...read more.