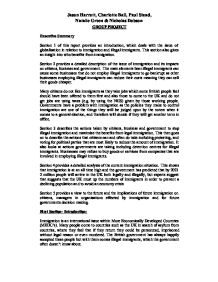 Section 1 of this report provides an introduction, which deals with the issue of globalisation in relation to immigration and illegal immigrants. This section also gives an insight into who benefits from immigration.

GROUP PROJECT Executive Summery Section 1 of this report provides an introduction, which deals with the issue of globalisation in relation to immigration and illegal immigrants. This section also gives an insight into who benefits from immigration. Section 2 provides a detailed description of the issue of immigration and its impacts on citizens, business and government. The main elements been illegal immigrants can cause some businesses that do not employ illegal immigrants to go bankrupt as other businesses employing illegal immigrants can reduce their costs meaning they can sell their goods cheaper. Many citizens do not like immigrants as they take jobs which some British people feel should have been offered to them first and also those to come to the UK and do not get jobs are using taxes (e.g. by using the NHS) given by those working people. Governments have a problem with immigration as the policies they make to control immigration are one of the things they will be judged upon by the voters when it comes to a general election, and therefore will decide if they will get another term in office. Section 3 describes the actions taken by citizens, business and government to stop illegal immigration and maximise the benefits from legal immigration. This then goes on to describe the actions that citizens can and often do take including protesting, and voting for political parties that are most likely to reduce the amount of immigration. It also looks at actions governments are taking including detention centres for illegal immigrants. Businesses may refuse to buy goods or services from companies that are involved in employing illegal immigrants. ...read more.

This is a problem, because to settle in a country you have to be able to integrate well in new surrounding and new people. A study from Swansea University suggests that the UK must up the numbers of immigrants in order to prevent a declining population and to avoid an economy crisis. This is being taking seriously by the government who are already changing the entry rules into the UK for immigrants who want to settle down in the UK. Here is a pie chart of the effect immigration is having on the UK. It suggests that it's damaged the UK and in some cases benefited the country as well . These results show and uncertain future regarding this subject as many people in the UK are split on this subject. Some people believe immigration has benefited the UK and some said it didn't, with some people saying they don't know. The current situation is dire, as the government faces an uncertain future regarding this subject. Every aspect of immigration is a problem for the UK and its growing. Rules are changing regarding immigration, but there's still the problem of illegal immigration, which seems never to go away. At the end of this report, an appendix has been enclosed showing a number of controls of immigration statistics of the United Kingdom for 2001. They include "total grants of settlement 1981 to 2001", also included is "distribution of immigrants year of entry". The final graph shows where immigrants are from. It shows that the most popular nationals are African with the most popular in the last few years, closely followed by western Chinese nationals. The appendix is fixed to the end of the assignment. ...read more.