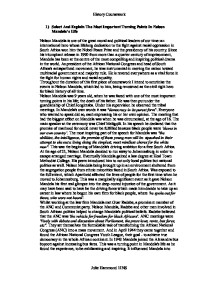 1) Select And Explain The Most Important Turning Points In Nelson Mandela's Life Nelson Mandela is one of the great moral and political leaders of our time: an international hero whose lifelong dedication to the fight against racial oppression in South Africa won him the Nobel Peace Prize and the presidency of his country. Since his triumphant release in 1990 from more than a quarter-century of imprisonment, Mandela has been at the centre of the most compelling and inspiring political drama in the world. As president of the African National Congress and head of South Africa's antiapartheid movement, he was instrumental in moving the nation toward multiracial government and majority rule. He is revered everywhere as a vital force in the fight for human rights and racial equality. Throughout the duration of this first piece of coursework I intend to scrutinise the events in Nelson Mandela, which led to him, being renowned as the civil right hero for black history of all time. Nelson Mandela was 9 years old, when he was faced with one of the most important turning points in his life; the death of his father. He was then put under the guardianship of Chief Jongintaba. Under his supervision he observed the tribal meetings. In Mandela's own words it was "democracy in its purest form". Everyone who wanted to speak did so, each expressing his or her own opinion. The meeting that had the biggest effect on Mandela was when he was circumcised, at the age of 16. The main speaker at the ceremony was Chief Meligqili. In his speech he declared that the promise of manhood for could never be fulfilled because black people were 'slaves in our own country'. The most inspiring part of the speech for Mandela was "the abilities, the intelligence, the promise of these young men will be squashed in their attempt to eke out a living doing the simplest, most mindless chores for the white man". ...read more.

Disinvesting companies within South Africa simply sold off their assets cheaply to the local white businessmen. Sporting and Cultural boycotts also affected the country as it was damaged the morale of South Africans. South Africa was first suspended and later expelled from the International Olympic Committee. The Olympic games committee refuse entrant into the games for any racially segregated teams. In addition in 1970 the UK cricket tour was cancelled, in 1961 South Africa left the British Commonwealth because of strong criticisms of its policies. Protestors against apartheid disrupted the last South African Springboks tour of the UK. These restrictions caused white South Africans to realise just how isolated they had become due to apartheid. This was the beginning of the public disagreement with apartheid and minority rule. Only a few extremists stayed true to the idea of minority rule and white supremacy. To outside observers, and also in the eyes of growing numbers of White South Africans, Apartheid stood exposed as morally bankrupt, indefensible and impervious to reforms. The collapse of global communism, the negotiated withdrawal of Cuban forces from Angola, and the culmination of the South-West African People's Organisation's liberation struggle in the negotiated independence of Namibia - formerly South-West Africa, administered by South Africa as a League of Nations mandate since 1919 - did much to change the mindset of Whites. No longer could Whites demonise the ANC and PAC as fronts for international communism. A number of business, student and academic Afrikaners held meetings publicly and privately with the ANC in exile. Secret talks were held between the imprisoned Nelson Mandela and government Ministers about a new dispensation for South Africa, with Blacks forming a major part of it. Inside the country, mass action became the order of the day. Petty Apartheid laws and symbols were openly challenged and removed. Together with a sliding economy and increasing international pressure, these developments made historic changes inevitable. ...read more.

FW de Klerk responded by announcing that if the ANC made South Africa ungovernable, the government might have to respond with unpleasant means. This may also be used as a further example of Mandela's importance in not only the removal of apartheid but also in helping to recover South Africa, as De Klerk respected Mandela and knew he needed Mandela's support to work out the solution to South Africa's problems. By January 1993, the government departments had abolished all other apartheid rules, and on 3rd of June 1993 CODESA set the date for South Africa's first national, non-racial general election. The ANC won the election and it was signified as the end of apartheid and minority rule. Although it was going to take some time before all the Afrikaners would be completely content with the idea of equality amongst all, however these could be said to be on of the beginning movement which allowed South Africa to become reunited and fully recover its past grievances. In addition, as Mandela was both founder and president of the ANC therefore further increasing Mandela's importance in the anti-apartheid movement hence, bringing the apartheid to a minority rule. In conclusion, Mandela played a more pivotal role in bringing about the end of apartheid due to his constant exertions and fights against it. However, Mandela cannot be completely commended for his efforts in the termination of the Apartheid. As although, Mandela fought against the apartheid for the best years of his life, on the other hand received no reactions from the Government to his efforts to remove the apartheid. Therefore indicating De Klerk played a crucial part in the anti-apartheid movement as he was president and had the power to end apartheid whilst Mandela didn't. Overall, making the end of Apartheid a joint combination of both FW de Klerk's efforts in the negotiations between the National party, although more so, Mandela's and the ANC progress and constant dedication which helped to bring about the end of minority rule. ?? ?? ?? ?? History Coursework Julie Hammond 11NS ...read more.