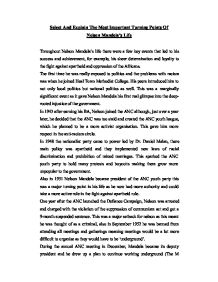 Select And Explain The Most Important Turning Points Of Nelson Mandela's Life Throughout Nelson Mandela's life there were a few key events that led to his success and achievement, for example, his sheer determination and loyalty to the fight against apartheid and oppression of the Africans. The first time he was really exposed to politics and the problems with racism was when he joined Heal Town Methodist College. His peers introduced him to not only local politics but national politics as well. This was a marginally significant event as it gave Nelson Mandela his first real glimpse into the deep-rooted injustice of the government. In 1943 after earning his BA, Nelson joined the ANC although, just over a year later, he decided that the ANC was too staid and created the ANC youth league, which he planned to be a more activist organisation. This gave him more respect in the anti-racism circle. In 1948 the nationalist party came to power led by Dr. Daniel Malan, there main policy was apartheid and they implemented new laws of racial discrimination and prohibition of mixed marriages. This sparked the ANC youth party to hold many protests and boycotts making them grow more unpopular to the government. Also in 1951 Nelson Mandela became president of the ANC youth party this was a major turning point in his life as he now had more authority and could take a more active role in the fight against apartheid rule. ...read more.

Support for him was tremendous and many celebrities helped in the 'free Mandela campaign'. Explain the part played by external pressure in the fight against apartheid and minority rule in South Africa. External pressure from the United Nations and other major sources played a large part in the breakdown of the African government, which inevitably led to the end of apartheid. During the 1960's many countries, including the USA, grew to despise apartheid and held protests to show their disapproval, many said they would impose sanctions on South Africa unless the government ended the apartheid state. In 1952 the United Nations publicly condemned apartheid. Later in 1962 the UN recommended the use of economic sanctions on South Africa, initially this put a lot of pressure on the South African government but mysteriously not long after there was worldwide condemnation, South African exports to Europe, America and Asia rapidly rose by up to 300%. Many loans were cancelled and firms like Esso and Barclays withdrew a lot of investment from South Africa and the United Kingdom boycotted loans to South Africa. As South Africa's wealth had increased due increased prosperity they gradually became more self- sufficient and inevitably overcame the economic sanctions. Therefore they didn't really play much of a large role in the breakdown of apartheid but they did show that many countries were against their policies and determined to change the racist and unethical government initiative. ...read more.

On 2nd February 1990, he made many major changes to the law, for example: 30 bans were lifted on anti-apartheid organisations, newspapers could report freely and the death sentence was stopped. These changes dramatically affected the break down of apartheid and played a large role in the end of minority rule as it showed 'blacks' that their protests were worthwhile. In 1991 de Klerk called a referendum on whether the nation wanted to continue towards true democracy and 70% voted in favour, this was very important as it showed that, unlike in previous years, everyone's opinion was valid. President de Klerk once said, "We desire to create a society in which all people are victors, instead of one consisting of winners and losers..." which showed him to be an ethical and essential member in the fight against apartheid. Inevitably both Nelson Mandela's and President de Klerk's roles in the fight against apartheid were completely different, Nelson was very important as he was an idol and an amazing campaigner he gave up his life for the cause and this made others fight against apartheid too, whereas De Klerk was the person that actually passed the laws and actually ended apartheid. All things considered, even though De Klerk was the person that actually legally ended apartheid I think that it was Nelson Mandela that was the most important person as he fought all his life and was a symbol of hope and idolization to all other protesters. ...read more.