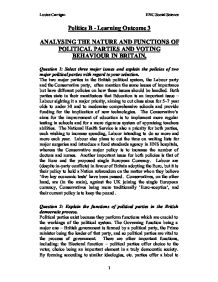 Politics B - Learning Outcome 3 ANALYSING THE NATURE AND FUNCTIONS OF POLITICAL PARTIES AND VOTING BEHAVIOUR IN BRITAIN. Question 1: Select three major issues and explain the policies of two major political parties with regard to your selection. The two major parties in the British political system, the Labour party and the Conservative party, often mention the same issues of importance but have different policies on how these issues should be handled. Both parties state in their manifestoes that Education is an important issue - Labour sighting it a major priority, aiming to cut class sizes for 5-7 year olds to under 30 and to modernise comprehensive schools and provide funding for the implication of new technologies. The Conservative's aims for the improvement of education is to implement more regular testing in schools and for a more rigorous system of appraising teachers abilities. The National Health Service is also a priority for both parties, each wishing to increase spending, Labour intending to do so more and more each year. Labour also plans to cut the time on waiting lists for major surgeries and introduce a food standards agency in HNS hospitals, whereas the Conservative major policy is to increase the number of doctors and nurses. ...read more.

providing a means of communication between party members and people within that local constituency, people becoming politically active within their constituency areas etc. Political parties receive funding from a number of different sources, which can depend on the nature of the party itself (i.e. the Labour party traditionally receives a large portion of its funding from trade unions), but generally funding comes from individual and corporate donations, party membership fees, sponsorship and commercial events. Question 3: Why do people vote the way they do? How, and to what extent, do factors such as class, sex, age, race, religion and region influence voting behaviour? Many factors are said to influence voting behaviour, however in many areas the extent to which this is true is unclear. Possibly the most commonly thought factor which influences voting behaviour is class. Most would agree with the notion that working class people are more likely to vote Labour and that middle class people are more likely to vote conservative and, up until the late 1970's there appeared to be statistical evidence of people voting for their traditional class party. ...read more.

It could also be argued, particularly in recent times, that the media can play a sizeable part in influencing voting behaviour. For example, Labour most recent election campaign encouraged popular musicians, etc. to become involved in supporting the party, under the banner of Labours 'cool Britannia', perhaps in an attempt to encourage younger voters to vote for labour. Also, as the Prime Ministers role becomes more 'presidential' in style, the actions of the Prime Minister himself can shape voting - being seen in 'the right place' or doing 'the right thing' can be enough to win extra votes. Similarly, the success of the existing Prime Minister/government can be enough to win more supporters. If it seems that policy promises have been kept, and that the country is in a period of prosperity and has benefited from the leading parties rule, those who may not have voted for them before will be persuaded to change allegiance in light of their success. With this in mind, it is also the case that if a government have been seen to handle a main issue well (war, for example) this can result in a similarly persuasive effect, encouraging voters to 'stick with' the ruling party. Louise Carrigan HNC Social Science 1 ...read more.