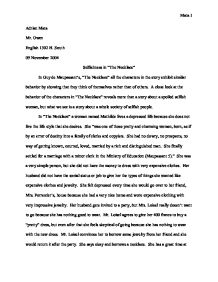 Adrian Mata Mr. Owen English 1302 H. South 09 November 2004 Selfishness in "The Necklace" In Guy de Maupassant's, "The Necklace" all the characters in the story exhibit similar behavior by showing that they think of themselves rather than of others. A close look at the behavior of the characters in "The Necklace" reveals more than a story about a spoiled selfish woman, but what we see is a story about a whole society of selfish people. In "The Necklace" a woman named Mathilde lives a depressed life because she does not live the life style that she desires. She "was one of those pretty and charming women, born, as if by an error of destiny into a family of clerks and copyists. She had no dowry, no prospects, no way of getting known, courted, loved, married by a rich and distinguished man. She finally settled for a marriage with a minor clerk in the Ministry of Education (Maupassant 5)." She was a very simple person, but she did not have the money to dress with very expensive clothes. Her husband did not have the social status or job to give her the types of things she wanted like expensive clothes and jewelry. ...read more.

She shows more selfishness while leaving the party, when she leaves in a rush because she doesn't want the other women to see her shawl that her husband brought for her to wear after the party, which was a "modest, everyday wrap" compared to the expensive furs the other women were wearing. This is selfish because she is ashamed of the garments that she wears in her everyday life. Even though those garments may provide warmth for her, she still feels very ashamed of her inexpensive clothing. When she figures out that she had lost the necklace, Mr. Loisel goes off to try and find it without any luck. They buy a replacement for thirty-six thousand francs. They struggle for all the necessities they once had to pay off the necklace. Ten years pass until they finish paying off the necklace. While relaxing at the park, Mrs. Loisel sees her friend Mrs. Forrestier in the park and confesses everything to her even though Mrs. Forrestier did not recognize her at first. After hearing the confession from Mathilde, Mrs. Forrestier shocks Mrs. Loisel with the news that the necklace she lost was just "costume jewelry. At most, it was worth only five hundred francs (Maupassant 12)!" ...read more.

The group of men at the party who were asleep in the other room while their wives danced their hearts out are all selfish people. They thought of themselves because they were bored and tired, so they went to sleep in another room. This showed their selfishness because they did not stay and dance with their wives, but instead thought of themselves and went to sleep. The group of women at the party were also selfish because they were not considerate of how tired their husband's were. They thought of themselves because they danced to their heart's content. The group of women were also selfish because they wore expensive furs and frowned upon others who wore cheap clothing. You see this when Mrs. Loisel is in a rush to leave the party because she did not want the women to see her wearing her "modest, everyday wrap (Maupassant 8)." The group of women and men were just as selfish as Mrs. Forrestier, the Chancellor, and Mr. and Mrs. Loisel. In conclusion, Guy de Maupassant's "The Necklace" does not only tell the story of a spoiled selfish woman, it tells the story of a whole society of selfish people. Besides Mathilde in the story, her husband, Mrs. Forrestier, the Chancellor, and the groups of men and woman at the party were all very selfish thinking about themselves and less caring of others. ...read more.