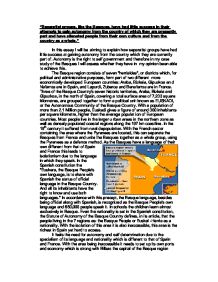 &quot;Separatist groups, like the Basques, have had little success in their attempts to gain autonomy from the country of which they are presently part and have alienated people from their own culture and from the country as a whole

"Separatist groups, like the Basques, have had little success in their attempts to gain autonomy from the country of which they are presently part and have alienated people from their own culture and from the country as a whole." In this essay I will be aiming to explain how separatist groups have had little success at gaining autonomy from the country which they are currently part of. Autonomy is the right to self government and therefore in my case study of the Basques I will assess whether they have in my opinion been able to achieve this. The Basque region consists of seven "herrialdes", or districts which, for political and administrative purposes, form part of two different more economically developed European countries: Araba, Bizkaia, Gipuzkoa and Nafarroa are in Spain, and Lapurdi, Zuberoa and Benafarroa are in France. Three of the Basque Country's seven historic territories, Araba, Bizkaia and Gipuzkoa, in the north of Spain, covering a total surface area of 7,233 square kilometres, are grouped together to form a political unit known as EUSKADI, or the Autonomous Community of the Basque Country. ...read more.

With the area being inaccessible it needs to set up its own ports and economy which is strong with Bilbao the capital of the Basque region being the chief industrial place in Spain. Also Victoria is the city of exception urban design. In the beginning of the last century the Basque people were attracted to the republicans which advertised autonomy for votes and support and were given regional autonomy by the republican government in 1936. But a year later in 1937 the Basque people were overthrown by Franco's dictatorship, whereby he carried out reprisals including the outlawing of the Basque language, and he also ran the area as a police state executing intelligentsia and political leaders all the way through his reign until 1975. It led to the formation of ETA - Euskadi Ta Askatasuna (Basque country and freedom) in 1959 and by the late 1960's ETA had declared war on the Spanish state via killings, bombings and kidnappings. They fight for the independence of the Basque region and it is estimated 800 deaths have been a result of ETA's battle against the state. ...read more.

Although in 1979 the Basque region gained some autonomy via the statue of the Spanish constitution. While there have been constant claims for autonomy in the Basque territory controlled by France, the French government has never conceded any degree of political control. This article, therefore, deals exclusively with the peninsular, or Spanish, area. The Spanish Basque territory is itself politically divided into two autonomous communities: the Statutory Community of Navarre and the Autonomous Community of the Basque Country. ETA also had an impact upon the area, mainly the Basque region for which it wanted independence, it lead to extreme violence and still is a problem nowadays although there was a ceasefire in November 1999. ETA although a terrorist group has been listened to and has had some if not all of its aims met and autonomy even though not complete self government has occurred, it still has some freedoms. In my opinion I think that the Basque region could have a good and successful autonomy if the Spanish government let them try. The economy is strong and the social and cultural reasons for separatism are valid points. ...read more.