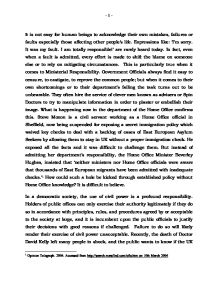 It is not easy for human beings to acknowledge their own mistakes, failures or faults especially those affecting other people's life. Expressions like: 'I'm sorry. It was my fault. I am totally responsible!' are rarely heard today. In fact, even when a fault is admitted, every effort is made to shift the blame on someone else or to rely on mitigating circumstances. This is particularly true when it comes to Ministerial Responsibility. Government Officials always find it easy to censure, to castigate, to reprove the common people; but when it comes to their own shortcomings or to their department's failing the task turns out to be unbearable. They often hire the service of clever men known as advisers or Spin Doctors to try to manipulate information in order to plaster or embellish their image. What is happening now in the department of the Home Office confirms this. Steve Moxon is a civil servant working as a Home Office official in Sheffield, now being suspended for exposing a secret immigration policy which waived key checks to deal with a backlog of cases of East European Asylum Seekers by allowing them to stay in UK without a proper immigration check. ...read more.

In doing so they should be guided by the policy of the Government on evidence to Select Committees and by the requirements of security and confidentiality. The civil servant's first duty is to his or her Minister. Thus, when a civil servant gives evidence to a Select Committee on the policies or actions of his or her Department, he or she does so as the representative of the Minister in charge of the Department and subject to the Minister's instructions and is accountable to the Minister for the evidence which he or she gives. The ultimate responsibility lies with Ministers, and not with civil servants, to decide what information should be made available, and how and when it should be released.6 Coming now to the problem surrounding the death of Dr. Kelly, it is right to say that the Government was not united in connection with the legal reasons of going to war against Iraq and this moved Mr. Robin Cook, former Foreign Secretary and the leader of the House of Commons to resign. Mr. Cook made it clear in his speech before he resigned: "I can't accept collective responsibility for the decision to commit Britain now to military action in Iraq without international agreement or domestic support. ...read more.