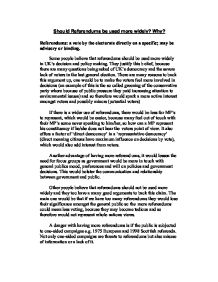 Should Referendums be used more widely? Why?

Should Referendums be used more widely? Why? Referendums: a vote by the electorate directly on a specific; may be advisory or binding. Some people believe that referendums should be used more widely in UK's decision and policy making. They justify this belief, because there are many questions being asked of UK's democracy and the severe lack of voters in the last general election. There are many reasons to back this argument up, one would be to make the voters feel more involved in decisions (an example of this is the so called greening of the conservative party where because of public pressure they paid increasing attention to environmental issues) ...read more.

It also offers a factor of 'direct democracy' in a 'representative democracy' (direct meaning citizens have maximum influence on decisions by vote), which would also add interest from voters. Another advantage of having more referendums, it would lessen the need for focus groups as government would be more in touch with general publics mood, preferences and will on policies and government decisions. This would bolster the communication and relationship between government and public. Other people believe that referendums should not be used more widely and they too have a many good arguments to back this claim. ...read more.

Another reason not to use referenda more widely and possibly the main one is that the government do not have to take the results into consideration, but they can simply use them as opinion poles, rather than policy changers or decision makers. If this was the case then less people each time, the government pay no attention and go against the referenda's result would bother to vote. Clearly the overuse of referenda would not be a good idea, because as well as the arguments stated above also it may simplify a complex issue to a yes or no vote, or even merge to important issues into one. But my main reason for not thinking that the overuse of referendums is they may let governments get away by shifting blame to public for unpopular decisions. ...read more.