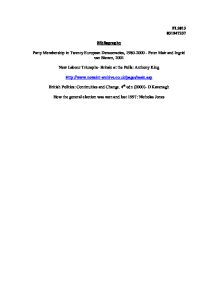 Should the 1997 general election be viewed as a 'critical election'?

PL2013 031947237 Bibliography Party Membership in Twenty European Democracies, 1980-2000 - Peter Mair and Ingrid van Biezen, 2001 New Labour Triumphs- Britain at the Polls: Anthony King Http://www.newsint-archive.co.uk/pages/main.asp British Politics: Continuities and Change. 4th edn (2000)- D Kavenagh How the general election was won and lost 1997: Nicholas Jones PL2013 031947237 Should the 1997 general election be viewed as a 'critical election'? A critical election is one, which has significant implications for the long-term party order as well as long lasting realignments in the electorate. In order to assess whether the 1997 election was critical I must initially look to the criteria for an election to be considered critical. I then intend on commentating on the main parties fortunes in the run up to the election and since, followed by a brief comparison to the 1979 general election that is viewed as critical. Along the way I hope to explain how the 1997 general election in my opinion fit's the criteria of a critical election using numerous different sources. The first of the three features, which make an election critical, is a change in the social basis of party allegiance. Secondly is a change in the ideological basis of party competition and lastly a change in the partisan loyalties of the electorate1. In the run up to the election in question the Labour party underwent a massive transformation by re-modelling the party with changes right down to it core. ...read more.

The Conservatives moved rapidly from being the natural party in power to a party out of touch with Britain and even itself. It was almost as if their own success was their downfall, after a record 18 years in power they no longer appeared to have a grasp pf what was required to form able and popular government. They failed to modernise and appeal to larger base of a changing electorate, the majority of their support came from voters aged over 65. The party was also plagued by the media for reports of 'sleaze' in the party. In particularly Neil Hamilton and the 'cash for questions scandal'3, asking questions in Parliament for cash handouts wasn't what the party needed at a time when they're honesty and integrity was being bought into question. This was yet another example of Major losing his grip on party activity. Even though they won the 1992 general election the Conservatives began losing the support of the electorate and never looked like recovering. This loss in support of the electorate following the win in 1992 was largely down to despite promises not to raise taxes they did so twice. In the 1992 Tory election campaign the party attacked Labour for their intentions to raise taxes. This raising of taxes resulted in the party's honesty coming under fire, and furthermore seriously the loss of two by-elections. So the wheels were in motion for the Conservatives to slip up prior to the 1997 election, the party were in a state of disarray they seemed to be on a downward spiral. ...read more.

Labour also experienced problems with economy and they suffered 'The winter of discontent', problems they had great difficulty dealing with also very much like the Major government. The Conservatives fought their election campaign by successfully changing the party order to New Rightism, a fresh ideal for the electorate, as was New Labour's approach. Another similarity can be found in that of both times the winning party's were led by charismatic and powerful leaders, Margaret Thatcher in the case of the Tory's in 1979 and Tony Blair for New Labour in 1997. Lastly the two main factors in both elections were the winning party's gained the middle ground of the electorate and to their favour experienced a change in the partisan loyalties of the electorate. After considering the effects of the election on the three main parties' and considering the criteria for what makes an election critical. With the comparison of the 1979 election I must conclude that in my opinion the 1997 general election was indeed critical due to it long term effects on the fortunes of the three parties' and the way in which the partisan loyalties of the electorate were not only questioned but changed with long lasting effect. Considering Britain current political climate I would expect Labour to remain in power for many years to come, whether under Tony Blair's leadership is questionable. 1 Lecture 5: Voting Behaviour 2 New Labour Triumphs: Britain at the polls; Anthony King 3 http://www.newsint-archive.co.uk/pages/main.asp 4 The political landscape in the UK today ...read more.