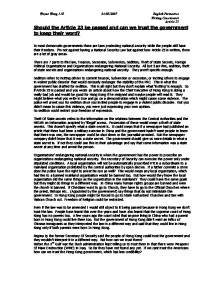 Should the Article 23 be passed and can we trust the government to keep their word?

Should the Article 23 be passed and can we trust the government to keep their word? In most democratic governments there are laws protecting national security while the people still have their freedom. I'm not against having a National Security Law but against how Article 23 is written, there are a lot of gray areas. There are 7 parts to this law, Treason, Secession, Subversion, Sedition, Theft of State Secrets, Foreign Political Organizations and Organizations endangering National Security. All but 3 are fine, sedition, theft of state secrets and organizations endangering national security. They aren't specific enough. Sedition refers to inciting others to commit treason, Subversion or secession, or inciting others to engage in violent public disorder that would seriously endanger the stability of the PRC. This is what the government has drafted for sedition. This is all right but they don't explain what 'inciting' is enough. ...read more.

But the newspaper company didn't know that it was a state secret. The government should give us more details in what a state secret is. If not they could use this to their advantage and say that some information was a state secret at any time and arrest the person. Organizations' endangering national security is when the government has the power to proscribe an organizations endangering national security. The secretary of Security can exercise the power only under stipulated conditions. A local organization will not be automatically proscribed if it is a subordinate to a mainland organization prohibited by the central authorities by open decree. If a father commits a crime does the police have the right to arrest his son as well? This would mean any local organization, which had ties to a banned mainland organization would be banned too. ...read more.

A few yours ago the court ruled that anyone living in China who had a parent born in Hong Kong could live there too. But the government of Hong Kong didn't want an influx of Chinese immigrants so they interpreted the law in a different way and said that they could live in Hong Kong only if both parents were born In Hong Kong. Regina Ip the former Secretary Of Security said the people of Hong Kong could trust the government and they wouldn't interpret it in a different way. But how can we trust them? Before the 2nd Gulf war the Bush administration kept telling us to trust them in that there were Weapons Of Mass Destruction (WMD) in Iraq. So far they have not found any yet. If we cant trust the Americans how can we trust the Hong Kong government, which has less credibility? Wayne Wong 11E 01/05/2007 English Persuasive Writing Coursework Article 23 ...read more.