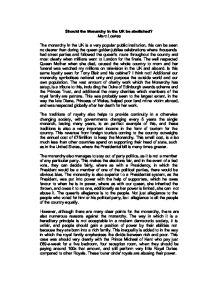 Should the Monarchy in the UK be abolished?

Should the Monarchy in the UK be abolished? Marc Loakes The monarchy In the UK is a very popular public institution, this can be seen no clearer than during the queen golden jubilee celebrations where thousands had street parties and followed the queen's route throughout the country and most clearly when millions went to London for the finale. The well respected Queen Mother when she died, caused the whole country to morn and her funeral was watched my millions on television in the UK and aboard. Is this same loyalty seen for Tony Blair and his cabinet? I think not! Additional our monarchy symbolises national unity and purpose the outside world and our own population. The vast amount of charity work which the Monarchy has setup, is a tribute to this, including the Duke of Edinburgh awards scheme and the Princes Trust, and additional the many charities which members of the royal family are patrons. This was probably seen to the largest extent, in the way the late Diana, Princess of Wales, helped poor land mine victim abroad, and was respected globally after her death for her work. ...read more.

The queen's allegiance is to the people. Not just allegiance to the people who voted for him or his political party, but allegiance to all the people of the country equally. However, although there are many clear points for the monarchy, there are also numerous reasons against the monarchy. The way in which it is a hereditary principle is not acceptable in a modern democratic society, it is unfair, and people should gain a position of power by their abilities not because they are born into a rich family. This inequality is added to in the way in which the royal family emphasises the divide between rich and poor. This case was should very clearly with the Prince Michael of Kent who pay just �69-a-week for a five bedroom, four reception room, when they should be paying around 100x that amount, and still perform very little Royal Duties compared to other Royals. These 'outer circle' royals are abusing their power. These days the respect for the Royal Family has also dwindled, and they no longer have full support, when in August 1997, only 48% of population thought the country would be worse of with no monarchy. ...read more.

In conclusion I think the monarchy should not be abolished and is a integral part of British society, I have found that most arguments against the monarchy can also easily be counter argued, as republicans say that the monarchy continues class injustice. Well the monarchy is a concept which can transcend class divisions in the sense that, in the eyes of the monarch, all are equal before the Crown. You can look at modern monarchies such as in Japan, Norway and Netherlands, these are all prosperous fair countries, and then look at republics with so called 'equality', such as the countries of central and southern America and Africa, rife with oppression and class injustice. Additionally the cost of the monarchy is far less than other countries spend on their president and are needed for the monarchy to be the majestic group, it should be. The idea that the monarchies behaviour is extremely bad, is just the same actions, as recent governments have been, which hold the equally important responsibility to be respected. Are affairs, bribery, corruption, lies, prostitution and paedophilia acceptable? No! but all have been connected to recent governments. ...read more.