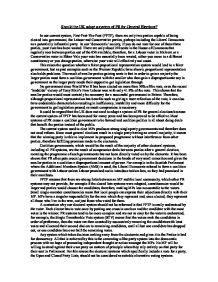 Should the UKadopt a system of PR for General Elections?

Should the UK adopt a system of PR for General Elections? In our current system, First-Past-The-Post (FPTP), there are only two parties capable of being elected into government, the Labour and Conservative parties, perhaps including the Liberal Democrats as a potentially influential party. In our 'democratic' society, if you do not vote for one of these three parties, your vote has been wasted. There are only about 250 seats in the House of Commons that regularly veer between parties out of the 650 available, therefore, for a Labour voter in Malvern or a Conservative voter in Ebber Vale your vote has essentially been wasted, either you move to a different constituency or you change parties, otherwise your vote will effectively not count. This raises the question whether a fairer proportional representation system would lead to a fairer government, but as past examples such as the Weimar Republic have shown, proportional representation also holds problems. The result of smaller parties gaining seats is that in order to gain a majority the larger parties must form a coalition government with the smaller who then gain a disproportionate say in government as the larger party needs their support to get legislation through. No government since World War II has been elected on more than 50% of the vote, even the recent 'landslide' victory of Tony Blair's New Labour won with only 41.9% of the vote. ...read more.

3 of every 5 said the current system for governing the UK needs to be improved 'quite a lot' or 'a good deal'. A reason for reforming the current electoral system of FPTP is that in recent years the turnout to general elections has fallen dramatically. At the 1997 General Election the turnout was 71.6%, which was the lowest since the Second World War and the 2001 General Election saw a turnout of 59.4%, the lowest since 1918's 57% (a year in which many voters had still not returned to their homes after military service). The dramatic fall in turnout is seen as a result of a number of contributing factors; socio-economic pressures, demographic changes, a decline in party identification (increased from 7% in 1997 to 10% in 2001) and the electoral system. The results of the 2001 election illustrate that a strong factor in turnout is the public's perception of the importance of their vote. In safe seats, where many voters may have felt that their vote would not count or make a difference, turnouts fell very low. For example, in 1997 in Liverpool Riverside there was a turnout of 34.1% and Labour won with a 21,799 majority, in Glasgow Shettleston the turnout was 39.7% and Labour won with a majority of 15,868. ...read more.

The List system gives the voter a degree of choice between candidate and party and leads to highly proportional results. However, the closed-list system also tends to give the party a great degree of control in deciding which candidates will be elected from the party list. Lists also encourage minority parties, but can make it easier for extremist parties to come into power. The AMS gives voters more say than FPTP because they can vote for a person and a party. It has been successful in Germany where a coalition government has been formed between the Social Democrats and the Green Party. Under this system more votes count making it more democratic and it removes the fact that some parties are over represented in Parliament. However, the UK could benefit from adopting a new electoral system that is not proportional. There are four main approaches the UK could take. The Alternative Vote ensures that no one can be elected in a constituency unless they have at least 50% of the votes. It means that there are less wasted votes and encourages people to vote for who they support, even if they are minorities. However, it does not lead to a nationally proportional result. The Suplimentary Vote system, used to elect the Lord Major of London, also ensures that the candidate recieves over 50% of the vote. ...read more.