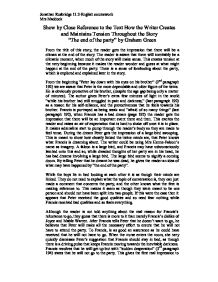 Show by Close Reference to the Text How the Writer Creates and Maintains Tension Throughout the Story &quot;The end of the party&quot; by Graham Green.

Show by Close Reference to the Text How the Writer Creates and Maintains Tension Throughout the Story "The end of the party" by Graham Green From the title of this story, the reader gets the impression that there will be a climax at the end of the story. The reader is aware that there will inevitably be a climatic moment, when much of the story will make sense. This creates tension at the very beginning because it makes the reader wonder and guess at what might happen at the end of the party. There is a sense of foreboding about the party, which is explored and explained later in the story. From the beginning "Peter lay down with his eyes on his brother" (2nd paragraph 192) we are aware that Peter is the more dependable and older figure of the twins. He is obviously protective of his brother, (despite the age gap being only a matter of minutes). The author gives Peter's extra few minutes of light in the world "while his brother had still struggled in pain and darkness," (last paragraph 192) as a reason for his self-reliance, and the protectiveness that he feels towards his brother. Francis is portrayed as being weak and "afraid of so many things" (last paragraph 192), when Francis has a bad dream (page 192) the reader gets the impression that there will be an important event there and then. This excites the reader and raises an air of expectation that is hard to shake off once it is in place. It makes adrenaline start to pump through the reader's body so they are made to feel tense. ...read more.

The reader is almost as scared as Francis, only they are scared for him and not of the dark itself. They are thinking of ways that he could avoid the game. Their mind races wildly as they try to come up with a solution. This makes the reader tense because they feel that they are in a race against time, despite the fact that they can stop reading at any point. At tea Francis becomes "fully conscious of the imminence of what he feared." (2nd paragraph 196). When Joyce announces at the table that they would play hide and seek in the dark after tea, Peter is brought back into the story after having not much to do in the middle of it. He sees Francis's "troubled face" (near bottom of 196) and remembers that this is the moment that Francis has been dreading all day. This was why he had been "ill" that morning and why he hadn't wanted to go to the party. Once again he tries to intervene on Francis's behalf and stop the game from going ahead. When informed that the game is in the "programme" he knows that it is useless to argue. Yet again there is a sense that the future is written, (the programme is a symbol of this), and that nothing either of the twins do can stop the irresistible force/driving pulse, pushing them towards the game. Peter has failed for the third time and has let down his brother. Just before the boys leave the dinner table to go into the hall, Peter again sees the great bird darken his brothers face. ...read more.

Then as sudden as it descended the darkness is gone. The chandelier lights up, "like a fruit-tree, into bloom." (1st paragraph 200) and the reader feels the tension release itself as the ordeal is over for Francis. The questions regarding the whereabouts of Peter and Francis are reassuring in their own right. The scream of Mrs Henne-Falcon lets the reader know that Francis's true fate is much worse than they had thought just moments before. The tension is at its peak as the reader knows that at this point, Francis's fate has been decided by the writer. These lines feel like the longest in the story. The tension has reached its peak. "Francis Morton's stillness" (last paragraph 200) is enough to tell the reader what has happened. His irregular heart beat had been the sign of a weak heart. Now this was the proof. Tension slips away and gives way to grief. The grief of Peter and that of the reader. The muscles are aching, from the build up of tension that has lasted for the duration of the story and for several minutes after the reader has finished, as he/she sits in silence thinking about the story. In conclusion I think that tension was created and maintained effectively throughout the story. So well, that it transfers itself to the readers body. It is maintained by the steady driving irresistible pulse that takes the story to its conclusion. It is only when the story comes to an end that the reader realises just how tense he has been. While the tension eases out of him it is apparent that the writer has been manipulating the reader and used his body to help maintain the tension throughout. By Jonathan Rusbridge Jonathan Rusbridge 11.2-English coursework Mrs Maddock ...read more.