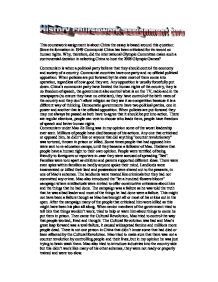 Since its formation in 1949 Communist China has been criticised for its record on human rights. Why, therefore, did the international Olympic Committee make such a controversial decision in selecting China to host the 2008 Olympic Games?

This coursework assignment is about China the essay is based around this question: Since its formation in 1949 Communist China has been criticised for its record on human rights. Why, therefore, did the international Olympic Committee make such a controversial decision in selecting China to host the 2008 Olympic Games? Communism is when a political party believe that they should control the economy and society of a country. Communist countries have one party and no official political opposition. When policies are put forward by the state most of them come into operation, regardless of how good they are. Any opposition is usually forcefully put down. China's communist party have limited the human rights of the country, they is no freedom of speech, the government also control what is on the TV, radio and in the newspapers (to ensure they have no criticism), they have control of the birth rates of the country and they don't allow religion as they see it as competition because it is a different way of thinking. Democratic governments have two political parties, one in power and another that is the official opposition. When policies are put forward they may not always be passed as both have to agree that it should be put into action. There are regular elections, people can vote to choose who leads them, people have freedom of speech and better human rights. ...read more.

The people had gotten social freedom but not political freedom and that was what they wanted. The protests in Tiananmen Square were very peaceful and were mainly students staging a sit-in because they wanted a grater say in how the country, their lives were run, it was a pro-democracy movement. At the time that the protest was staged President Gorbachev was visiting; the protesters also went on a hunger strike and eventually stole the front page of the worlds press and the news headlines. Deng had been humiliated to the world by the students. The protest went on but Deng brought together the peoples army and he imposed martial law. No one expected him to use violent force as he sent the troops in. The peaceful protesters were brutally attacked, but as they had made the news there were still lots of cameras there that captured the whole thing on film. After 22 days the protests stopped as hundreds of people had been injured and lots had been killed. To this day the government still insists that no one was killed in Tiananmen Square. After this the freedom of press was tightly restricted so that no one could criticise Deng's actions. The movement had been suppressed but it still had followers so it did not completely disappear. Deng's reaction overall was too harsh. ...read more.

I had a lot of maps the ones that I used were not very reliable as they were mostly photocopied that were blurred, the print was very small and was hard to read so some of the names I used may have been wrong. The maps do help to show you the types of buildings and you can see that it was very busy as there were a lot of businesses. The lock museum was not reliable as it wasn't open and I didn't get a chance to go back to get some information. The archives had a lot of useful information, like clear maps that were easy to read, newspapers, pictures and census records. They were reliable as the pictures gave you a good idea of what all of the canal was like. You got an idea of how important it was to the town and all of the jobs that it provided. The canal has changed the basin has been extended and enlarged by the art gallery but there are things that haven't like the Stafford blue bricks on the walls of the canal. It was very useful as it is close by and you can go back once we had started the assignment and understood it more the changes and things that were saved could be found easier. ...read more.