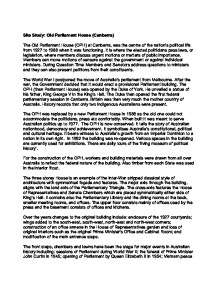 Site Study: Old Parliament House (Canberra) The Old Parliament House (OPH) at Canberra, was the centre of the nation's political life from 1927 to 1988 when it was functioning. It is where the elected politicians pass laws, or legislation, where members discuss urgent motions or matters of public importance. Members can move motions of censure against the government or against individual ministers. During Question Time Members and Senators address questions to ministers and they can also present petitions from their constituents. The World War I postponed the move of Australia's parliament from Melbourne. After the war, the Government decided that it would erect a provisional Parliament building. The OPH (then Parliament House) was opened by the Duke of York. He unveiled a statue of his father, King George V in the King's Hall. The Duke then opened the first federal parliamentary session in Canberra. Britain was then very much the mother country of Australia. History records that only two indigenous Australians were present. The OPH was replaced by a new Parliament House in 1988 as the old one could not accommodate the politicians, press etc comfortably. When built it was meant to serve Australian politics up to 1977. The OPH is now conserved. It tells the story of Australian nationhood, democracy and achievement. It symbolises Australia's constitutional, political and cultural heritage. ...read more.

This captures the politicians who make Australian history. In conformity with the traditional colours of the House of Lords and the House of Commons at Westminster, London, the carpet and upholstery in the Senate are red and those in the House of Representatives are green. The Speaker's Chair in the House of Representatives is a replica of the original one in the House of Commons. The Royal Arms over the Chair are carved in oak from timber originally built into Westminster Hall in 1399. The hinged flaps of the arm rests are of oak from Nelson's flagship Victory, in the Battle of Trafalgar 1805. The Chair symbolises the Australian Parliament's links with British history and the Parliament at Westminster. The courtyards feature Lombardy poplars as part of a commemorative planting ceremony in October 1926 by two British representatives of the Imperial Party League. They were removed in late 1995 and replaced with trees cloned from the original poplars. The House contains exhibits of Australian political history, including some accessible online. Exhibits include: 'People's Procession' (Australian Popular Movements from 1880s to 1950 - capturing Australian democracy showing the 'behind-the-scene' workings [by demos, pickets, parades and carnivals, and through letters, leaflets, newspapers, posters and placards] of individuals and organisations that influence major political parties, starting from the Eight Hours processions in the 1880s, to the Ban the Bomb rallies of 1950s); and 'Sound & Light Show' illustrating the history of the House of Representatives Chamber, and Australian society and politics from 1927 to 1988. ...read more.

The main effect of the Menzies Government's anti-communist activitist was to reduce Labor Party's chance of winning the election in 1954. Unfounded allegations prior to elections have since become a tool for political parties to win Government. The Menzies Government had a policy of anti-communism, belief in the 'domino theory' and support the US policy of containment. As a result Australian troops fought against communists in North Korea and also Vietnam. Menzies deception to involve Australia in the Vietnam War surfaced only ten years later after 1965. There were lots of opposition to the Vietnam War. It gave rise to the anti-war and anti-conscription movement. The exhibit include the most dramatic Aboriginal protests which gained worldwide attention when the Tent Embassy was created on the lawns of Parliament House in 1971. Australian political history took a turn, when the Whitlam Labor government came to power in 1972. He ended national service and participation in Vietnam, granted independence to Papua New Guinea, and instituted free health care and higher education systems. However, he alienated the mostly conservative Senate, and when the government attempted to finance mining interests with an illicit overseas loan in 1975, the opposition prevented the Senate from functioning. The Governor-General (until then, a largely decorative representative of the Crown overseeing Australian affairs) dismissed the government - a move that shocked many into questioning the validity of Britain's ultimate hold on Australia. Needless to say, the Old Parliament House and its exhibits bear witness to the development of Australia's political history. ...read more.