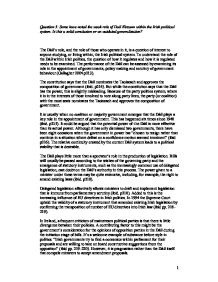 Some have noted the weak role of Dail Eireann within the Irish political system. Is this a solid conclusion or an outdated generalisation?

Question 3: Some have noted the weak role of Dail Eireann within the Irish political system. Is this a solid conclusion or an outdated generalisation? The D�il's role, and the role of those who operate in it, is a question of interest to anyone studying, or living within, the Irish political system. To understand the role of the D�il within Irish politics, the question of how it regulates and how it is regulated needs to be examined. The performance of the D�il can be assessed by examining its role in the appointment of governments, policy making and scrutiny of government behaviour (Gallagher 2004 p213). The constitution says that the D�il nominates the Taoiseach and approves the composition of government (ibid. p214). But while the constitution says that the D�il has the power, this is slightly misleading. Because of the party politics system, where it is in the interests of those involved to vote along party lines, the party (or coalition) with the most seats nominates the Taoiseach and approves the composition of government. It is usually when no coalition or majority government emerges that the D�il plays a key role in the appointment of government. This has happened six times since 1948 (ibid. p215). It could be argued that the potential power of the D�il is more effective than its actual power. ...read more.

Parliamentary questions are similarly limited in their impact, by the guidelines within which these questions must work. Answers as well as questions must be put down in advance-four days for oral and three days for written questions. This contributes to the ritualistic nature of the parliamentary sessions (Gallagher 2004 p227). The form that the answers take could hardly be described as an example of the D�il exerting its muscle. According to Gallagher (ibid. p228) the highly politicised nature of question time leads to ministers giving as little away as possible in their answers. "The culture is one of concealment, not openness." The Freedom of Information Act 1997 has proved to be a far more powerful investigative instrument than a parliamentary question (Connolly 2004 p348). Committees represent the most effective way in which the D�il scrutinises and impacts on government policy. During the committee stage (stage three of five) of the process for passing bills through the D�il, the opposition can give their opinions on the bill in the hope that the government will consider their proposed amendments. However, the eleven member committees are weighted 6-5 in favour of the government (Gallagher 2004 p231). There is obvious room for improvement in the committee system. Shaw (1979 cited in Gallagher 2004) ...read more.