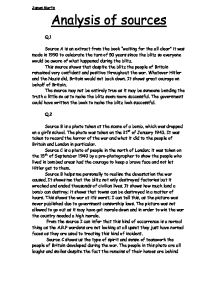 Source A is an extract from the book

James Martin Analysis of sources Q.1 Source A is an extract from the book "waiting for the all clear" it was made in 1990 to celebrate the turn of 50 years since the blitz so everyone would be aware of what happened during the blitz. This source shows that despite the blitz the people of Britain remained very confident and positive throughout the war. Whatever Hitler and the Nazis did, Britain would not back down. It shows great courage on behalf of Britain. The source may not be entirely true as it may be someone bending the truth a little so as to make the blitz seem more successful. The government could have written the book to make the blitz look successful. Q.2 Source B is a photo taken at the scene of a bomb, which was dropped on a girl's school. The photo was taken on the 21st of January 1943. It was taken to record the horror of the war and what it did to the people of Britain and London in particular. Source C is a photo of people in the north of London; it was taken on the 15th of September 1940 by a pro-photographer to show the people who lived in bombed areas had the courage to keep a brave face and not let Hitler get to them. ...read more.

The source shows the damage that was done and the mess the streets were left in. It shows people sorting through property to find their belongings as everything got mixed up. There are two people who appear to be arguing, probably over property and who it belongs to. It is very Smokey, which shows that the bomb has probably been recently dropped. In the background you can see a blown up buildings, which was destroyed in the bombing. It is an unusual picture to release as it shows the true horror and destruction of the war. I think that Source D agrees with Source B as they both show a lot of destruction. Source D disagrees with Source C as Source C shows the good side of the war (if there is such a thing). Source D shows the terrible side of the war. Q.4 The British government was concerned with the morale of the British people in autumn 1940 the following sources back up this statement. Source E was a secret report from the ministry of information wrote on the 10th of September 1940 to report the current situation with the people of Britain. This tells us that during the war the government concealed what was really going on. It tells of people flooding from the city and people not remaining calm as was shown in propaganda but running madly for the shelters in a panic-stricken state. ...read more.

The government released this making everyone think that this is what everyone should be like. They also were not as truthful with the public as they should have been. In sources E and G they say how the people were fleeing the city panicking and in sources B and D it shows the massive devastation caused by the bombs and how people lost their possessions and lives. In source B the area the A.R.P wardens are working with is fenced off and hidden from the public and censors banned the whole photo because it was not positive towards the war effort. All of these sources also greatly outnumber the positive reports, which say how life goes on, and everyone is in good spirits like sources A and C. From source F we find out public opinion of the government and royal family is not as good as thought or shown in other sources and we can trust this source as it is a diary and he is writing his inner personal thoughts. From my own knowledge and the government propaganda films I have seen the people are happy to stay in London and fight the good fight. Their opinion of the royal family and the government is quite high. When studying any unofficial censored or information not supplied by the government though shows the truth about what really happened during the war. The statement that courage and unity is a myth is true because of the outstanding abundance of evidence favouring that argument. ...read more.