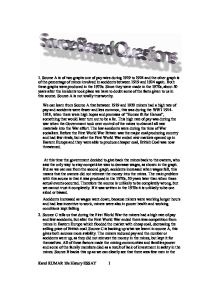 1. Source A is of two graphs one of pay rates during 1919 to 1924 and the other graph is of the percentage of mines involved in accidents between 1919 and 1924 again. Both these graphs were produced in the 1970s. Since they were made in the 1970s, about 50 years after the incidents took place we have to doubt some of the facts given to us in this source. Source A is not totally trustworthy. We can learn from Source A that between 1919 and 1920 miners had a high rate of pay and accidents were fewer and less common, this was during the WW1 1914-1918, when there were high hopes and promises of "Homes fit for Heroes", something that would later turn out to be a lie. This high rate of pay was during the war when the Government took over control of the mines to channel all raw materials into the War effort. The low accidents were during the time of War socialism. Before the First World War Britain was the major coal producing country and had few rivals, but after the First World War ended new markets opened up in Eastern Europe and they were able to produce cheaper coal, British Coal was now threatened. ...read more.

They control the press and the BBC radio, which people think is telling the truth, but actually the government is controlling and is saying what they want it to say. For example when the Archbishop of Canterbury tried to give his opinion of the Strike and tell the public why miners were striking, he was not allowed to speak on the radio. The government find it vital to win over the minds of the general public and have a paper put out to print lies and give an extremely bad and almost evil view of the miners and TUC. It said things like the TUC tried to starve London and that the police were amazing in stopping them. The British Worker (the TUC paper) is less damming on the government; the government are going in for the kill and are the British Worker is less argumentative. The government is printing many posters, either showing them as strong a proud or the miners as angry and evil people, as in source J, the government is showing A.J. Cook one of the miner leader as a smug angry person, who wants to stop parliament. The government keeping saying that the miners want revolution and anarchy and keeping attacking and the TUC attack the government very little. I Karel KUMAR 10s History ESSAY ...read more.