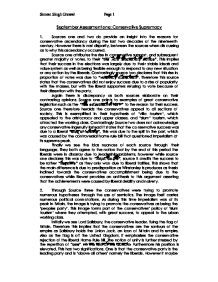 Source based work on Conservative Supremacy - around 1891.

September Assessment one: Conservative Supremacy 1. Sources one and two do provide an insight into the reasons for conservative ascendancy during the last two decades of the nineteenth century. However there is vast disparity, between the sources when discussing as to why this ascendancy occurred. Source one attributes the rise in conservative support, and subsequent greater majority of votes, to their "die hard reactionary stance". This implies that their success in the elections was largely due to their stable ideals and value system as well as being flexible enough to respond to any new situation or any action by the liberals. Contrastingly source two declares that this rise in proportion of votes was due to "voluntary abstention". Therefore this source states that the conservatives did not enjoy success due to a rise of popularity with the masses, but with the liberal supporters refusing to vote because of their dissention with the party. Again there is discrepancy as both sources elaborate on their contrasting opinions. Source one points to examples of great conservative legislation such as the "free education in 1891 " to the reason for their success. Source one therefore heralds the conservatives appeal to all sections of society. This is exemplified in their hypothesis of "villa tourism", which appealed to the aristocracy and upper classes, and "slum" tourism, which attracted the working class. Contrastingly Source two does not acknowledge any conservative ingenuity instead it states that the conservative success was due to a liberal "lack of funding". ...read more.

This policy was hugely unpopular due to a number of reasons, which the image in source three exploits. These were religious as well as political. The first was that at the height of Britain sovereignty it was very 'unenglish' and against the domineering nature of Britain at the time. This potential split could possibly lead to problems for the empire and had the prospective to be the 'tip of the separatist iceberg'. In addition there was wide public opinion that it would not work as it did not give complete independence to Ireland, therefore was vague. Finally it had religious implications, as Ireland was predominantly Roman Catholic therefore there was a fear in England that they're maybe a transition in rule from 'home rule to Rome rule'. This led to a split in the liberals, which was skilfully exploited, by Lord Salisbury and the conservatives. Therefore propaganda with an imperial spin was used to highlight to the people the conservatives' anti-home-rule-bill stance. 4. Lord Salisbury was the conservative leader during their ascendancy into power during the twenty-year period. He was certainly a factor in the ascendancy of the conservatives, however there is great argument as to whether his role was pivotal or peripheral. He was certainly not the only factor as there were other reasons such as conservative strengths and liberal weaknesses. Salisbury was an obvious strength of the conservatives. Originating from a wealthy background he did not have the stereotypical attributes of a widely revered leader. ...read more.

Problems were created even right at the pinnacle of the party with Gladstone resigning in 1894. This led to a leadership struggle that caused "serious divisions3" in the party. When the eventual successor, Rosebury, was chosen the radicals in the party despised him due to his Whig origins. These fundamental fractures in the party led to a 'crisis of identity'. Even though the party wanted to maintain its support from the working class its lack of funds meant that it needed support from the upper classes. Its lack f professionalism meant that this was virtually impossible. A majority of these problems stemmed from the Home Rule Bill and the divisions engineered by Salisbury. Subsequently in conclusion I disagree with the statement made that Salisbury had very little to do with the conservative ascendancy. Even though the liberal weaknesses were fundamental and reached the very dizzy height if the leadership, it was only due to Salisbury that they were brutally exposed. Therefore albeit there were other factors contributing to the conservative success, without the direct or indirect input of Salisbury these would not have been as fatal as were. Therefore the role of Salisbury proves paramount when exploring reasons for the conservative ascendancy during the period between 1886-1906. 1 "All legislation is rather unwelcome to these classes as it tends to disturb the state of things with what they are satisfied, our bills must be tentative and cautious and not sweeping and dramatic." Salisbury 2 According to Pugh (19920 and Lee (1994) 3 According to Watts (1995) Simran Singh Grewal Page 1 ...read more.