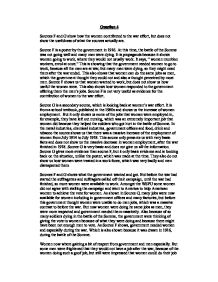 Sources F and G show how the women contributed to the war effort, but does not show the usefulness of what the sources actually are.

Question 4 Sources F and G show how the women contributed to the war effort, but does not show the usefulness of what the sources actually are. Source F is a poster by the government in 1916. At this time, the battle of the Somme was not going well and many men were dying. It is propaganda because it shows women going to work, where they would not usually work. It says, " women munition workers, enrol at once." This is showing that the government needed women to go to work, because all the men are at war, but many men were dying, so they might need them after the war ended. This also shows that women can do the same jobs as men, which the government thought they could not and also a thought perceived by most men. Source F shows us that women wanted to work, but does not show us how useful the women were. ...read more.

Source G is very basic and does not give us all the information. Source G gives more evidence than source F, but it only basic evidence and is looking back on the situation, unlike the poster, which was made at the time. They also do not show us how women were treated in a work force, which was very badly and men disrespected them. Sources F and G shows what the government wanted and got. But before the war had started the suffragettes and suffragists called off their campaign, until the war had finished, so more women were available to work. Amongst the WSPU some women did not agree with stalling the campaign and went to America to help American women to achieve the vote for women. As shown in Source G, many jobs were now available for women including in government offices and many factories, but before this government thought women were unable to do men jobs, which was a massive contrast to before the war. ...read more.

Government also appreciated what the women did but they thought before the war, women were useless, but now they are working in mens job, they praised all women. This shows that government were very desperate and needed women to go to work. And also help the injured from the war. Source F shows this very well and source G shows the massive increase in employment of women. Women thought they were better off than before and liked working and felt pleased of what they were doing and government praised them regularly. The war forced government to put trust in women and respect them for what they were doing. Because so many men were at war, factories that didn't allow women to work, now allowed them, otherwise they could not earn any money until the men got back from war. But sources F and G are very basic and does not tell us how useful women were to the war effort from 1914 to 1918. It shows that women were needed and employment of women increased not the full picture. ...read more.