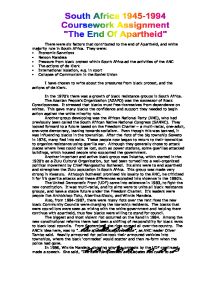 There were six factors that contributed to the end of Apartheid, and white majority rule in South Africa. They were: * Economic Sanctions * Nelson Mandela * Pressure from black protest within South Africa ad the activities of the ANC * The actions of de Klerk * International isolation, e.g. in sport * Collapse of Communism in the Soviet Union I have chosen to write about the pressures from black protest, and the actions of de Klerk. In the 1970's there was a growth of black resistance groups in South Africa. The Azanian People's Organization (AZAPO) was the successor of Black Consciousness. It stressed that blacks must free themselves from dependence on whites. This gave many blacks the confidence and support they needed to begin action against the white minority rule. Another group developing was the African National Party (ANC), who had previously been called the South African Native National Congress (SANNC). They looked forward to a future based on the Freedom Charter - a multi-racial, one-adult, one-vote democracy, leaning towards socialism. Even though this was banned, it was influencing blacks in the townships. ...read more.

Eventually in 1986, the nationalist government seemed to have the unrest under control. It was only after this that Nelson Mandela and the ANC began talks, which they realized had to be done to solve South Africa's problems. The violence and the government's reaction to it showed something had to be changed in South Africa. The government had only just restored law and order, which made it hard to continue with their policy of apartheid, which was the main cause of trouble in the first place. They realized that if they did not change the way things were, they would easily lose their country again, and may not find it so easy to get it back again. They also realized nothing had been done to meet any black demands. The new constitution was still in place, meaning blacks were still unhappy about the rent rises, and the black members of council, who they felt were traitors. The government had also brought in vigilantes to beat up the anti-apartheid protesters. This was a mistake, because although it solved the violence temporarily, the blacks were not going to be happy about it, because they were going to be persecuted for their beliefs. ...read more.

By January 1993, the government departments had abolished all other apartheid rules, and by November there was a new apartheid-free constitution. The first multi-racial, multi-party elections had even been planned for April 1994. By this time, apartheid seemed to be a thing of the past. Although it was going to take some time before all the white people would be happy with the equal situation, at least the government was in agreement with it, and as the government was so powerful, it seemed like it would not be long before the country was united again. However, although it seems as if de Klerk wanted equal power rights for all, he did not. He did not really know what he was doing; he thought whites could hole on to power through a new constitution. He also believed, as the ANC had so many different sorts of members, they would not be able to stay together, when it was the most secure black resistance party. Another point that added to the whites being in favour of the anti-apartheid rule, was the fact that Communist Russia had collapsed. This meant worries were destroyed about blacks causing a Communist government if they came to power. ...read more.