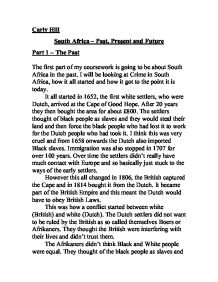 South Africa - Past, Present and Future

Carly Hill South Africa - Past, Present and Future Part 1 - The Past The first part of my coursework is going to be about South Africa in the past. I will be looking at Crime in South Africa, how it all started and how it got to the point it is today. It all started in 1652, the first white settlers, who were Dutch, arrived at the Cape of Good Hope. After 20 years they then bought the area for about �800. The settlers thought of black people as slaves and they would steal their land and then force the black people who had lost it to work for the Dutch people who had took it. I think this was very cruel and from 1658 onwards the Dutch also imported Black slaves. Immigration was also stopped in 1707 for over 100 years. Over time the settlers didn't really have much contact with Europe and so basically just stuck to the ways of the early settlers. However this all changed in 1806, the British captured the Cape and in 1814 bought it from the Dutch. It became part of the British Empire and this meant the Dutch would have to obey British Laws. This was how a conflict started between white (British) ...read more.

In 1926 a law was made that stopped black and Asians doing skilled jobs. Then in 1927 a law that banned sexual intercourse between black and whites. These were only some acts that the government passed and they only led to worser things. However in 1948 the government had accepted a report saying that total segregation of blacks and whites was impossible but the Purified National Party did not agree. This was the start of Apartheid. Apartheid was put into practise in 1948 it meant not only separateness but also total domination of other races. Over the years the government kept making new laws to keep whites in charge. These laws included the - Population registration act (1950) - Prohibition of mixed marriages act (1949) - Immorality Amendment act (1950) - Group areas act (1950) - Pass Laws etc. All of the laws basically did the same thing, which was kept whites separate from blacks. The black people knew they couldn't live like this but they didn't have much choice. In 1952, 8065 volunteers deliberately broke various Apartheid laws and each went to jail for a week or two and because the black people reacted like this the government came back at them with a new law - the criminal amendment act (1953), Things seemed to be getting worse and worse for the black people. ...read more.

This happened the same year as a new law was passed it was known as the sabotage act. This resulted in the defendants at the rivonia trial to be accused of sabotage. Mandela was also accused and in the end admitted being involved with MK. He was sentenced to life imprisonment. Then on 11th February 1990 he was released after 27 years and president de Klerk lifted the ban on the ANC and began to demolish petty apartheid. The ANC and the national party soon began talks about forming a new multi-racial democracy for South Africa. However violent clashes broke out between supporters of the Inkatha freedom Party, a Zulu group led by chief Buthelezi and ANC supporters. Despite attempts to resolve the problems through talks the violence soon grew and the Inkatha targeted ANC, with support from the white police. Over the time relations with de Klerk grew tense but the two leaders still continued to meet. Despite the violence there was progress and in February 1991 de Klerk announced that the last Apartheid laws would be scrapped. In 1994 South Africa rejoined the United Nations and the commonwealth, Apartheid was finally over and most of the success was down to Mandela. He did a lot to improve life for the blacks but also not upset white businessmen. The people now hoped they could live a life of freedom and peace. ...read more.