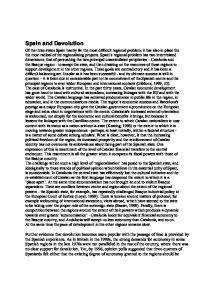 Spain and Devolution Of the three states Spain has by far the most difficult regional problem; it has also in place the the most radical of the regionalising projects. Spain's regional problem has two interrrelated dimensions: that of persuading the two principal unassimilated peripheries - Catalonia and the Basque region - to accept the state, and then drawing on the resources of these regions to support development in the other regions. These goals are contradictory and it has been a difficult balancing act. Insofar as it has been successful - and its ultimate success is still in question - it is been due in considerable part to the commitment of the Spanish centre and the principal regions to ever wider European and international contacts (Gibbons, 1999, 35). The case of Catalonia is instructive. In the past thirty years, Catalan economic development has gone hand in hand with cultural nationalism, increasing linkages with the EU and with the wider world. The Catalan language has achieved predominance in public life in the region, in education, and in the communications media. The region's economic success and Barcelona's prestige as a major European city give the Catalan government a prominence on the European stage and extra clout in negotiations with the centre. ...read more.

At the same time the pace of development in the other regions remains slow. Further evidence that devolution becomes more popular with the passage of time is provided by the Spanish experience. As in Britain in the 1990s, the strong demands for autonomy in some Spanish regions in the late 1970s were not paralleled in the rest of the country, where there was no clear support for devolution. Yet, by 1996, opinion polls suggested that three-quarters of Spaniards felt either that the existing degree of autonomy granted to the regions should be maintained or enhanced. Furthermore, these responses appear to be underpinned by a strong degree of identification with the respective autonomous communities. In the same opinion poll just over two-thirds of respondents reported either that they identified only with their autonomous community or as much with their autonomous community as they did with Spain. In Spain, a complex sharing of functions between the national, regional and local levels of government has evolved since the late 1970s. Figure 3 shows that central government in Spain has exclusive powers over areas such as defence and macro-economic management but that it shares responsibility for many functions with the autonomous communities, including housing, social welfare and economic development. ...read more.

The staggered emergence of regionalism in the UK does have something of a parallel in the Spanish case. Following the transition to a democratic regime in the late 1970s, the new Spanish constitution provided for twin-track devolution. Under this framework, regions with strong nationalist claims for devolution were allowed to move quickly towards such arrangements. Thus, Catalonia and the Basque Country introduced regional government in 1979, followed in 1981 by Galicia and, largely on political grounds, Andalusia. The remaining 13 autonomous communities were then introduced in 1982-83. The principle of a two-speed process of devolution has since been maintained, with subsequent bargaining between central government and individual autonomous communities enabling regional governments in areas such as Catalonia and the Basque Country to take greater control over their own affairs. While the Spanish case suggests that asymmetric devolution is an option for the UK, it leaves open the question of what might happen if the English regions fail to embrace regional government. Asymmetric devolution would seem to be an appropriate response to the problem that there are different levels of aspiration to self-government. However, experience in Spain also implies that a staggered process of devolution will need to be supported by national co-ordination mechanisms which ensure that regions slow to move towards regional autonomy are not disadvantaged and are encouraged to be part of a consensus on how devolution should proceed. ...read more.