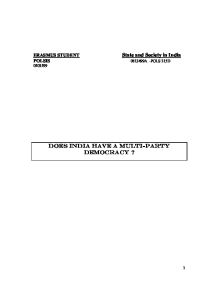 State and Society in India

ERASMUS STUDENT State and Society in India POLSIS 0813499A-POLS 215D 0503599 Does INDIA HAVE A MULTI-PARTY DEMOCRACY ? Does India have a multi-party democracy ? India is known for being by far the largest democracy in the world, with almost 600 million voters. India's democratic political system is a legacy of British colonialism (for instance their parliamentary government, or the First Past the Post electoral system), which ended in 1947. The British introduced self-government to India in stages, but it was not until the end of colonial rule and the adoption of the Indian Constitution in 1950 by a Constituent Assembly that universal suffrage was achieved. Despite this democratic basis, India's political life is also said to have been dominated for more than 50 years by nearly one party, the Congress, a party which was founded in December 1885, and was the first effective all-India political organisation. A question thus arises, about India having an effective multi-party democracy (a system of government by the whole population, with more than three political parties) . We will see in a first part that the Congress party has played a major role in Indian politics, and still does today, however, in a second part, we will analyse the elements which transformed this one-party system to an increasingly fragmented and unstable multi-party system. But let us begin with the examination of the predominant role of the Congress in India party-system. ...read more.

Not only were opposition activists faced with imprisonment, but power within Congress was further centralised. In addition to this, it cannot be denied that the Congress still plays a major role in India party-system, even if its famed one party dominance was over by the mid 1980s. However, the sympathy factor associated with the assassinations of Indira and Rajiv Gandhi in 1984 and 1991 respectively helped Congress to win difficult elections in both of those years. Even after the 1991 general election Congress was simply the largest party. No single party has won a majority in general election since 1984. Concerning coalitions parties, they usually collapse soon after having been elected because of internal factionalism: for instance in 1989 the Janata-Dal / National Front minority government collapsed less then one year after, and in 1996 the United Front stayed in office for a mere 13 days. Furthermore, even if the Bharatiya Janata Party (BJP) has been a prime beneficiary of Congress decline, it undoubtedly lacks strength outside its strongholds in the North (the Hindi Belt ) and the Western states of India. In 1998, the outcome of the election had enabled the party to form a coalition government, however, it did not manage to remain stable with one regional party the AIADMK from the southern state of Tamil Nadu, proving to be a particularly difficult partner, who eventually withdrew support in April, and consequently precipitated early elections. ...read more.

As a consequence, nowadays, effective electoral alliances are the key to winning national power in India as no party has a comprehensive national presence anymore. The Indian party-system is not a national one anymore; instead, it is composed of a patchwork of state-based party systems. As a consequence, national parties have to adapt their electoral strategies to this new structure, and issues of national importance have to be set alongside local political considerations. In a nutshell, we have seen that over the past 50 years, the Congress party has enjoyed a dominant position in Indian politics, and has often been characterised as a one-party dominant system, since the Congress largely benefited from the First Past the Post system of voting, as it managed for a long period of time to gather nearly all opposition parties within itself, or during the Emergency strongly threatened dissidents with imprisonment, but even today is the only single party to have won a majority in a general election. However, opposition parties could practically always be heard (even if it was within the Congress party), and a real market polity is increasingly emerging in India, mostly because of the cultural diversity of the country. India is thus becoming more democratic, and is learning step by step to build its own political culture. Such a process is far from being easy after having being ruled for so long by the English. ...read more.