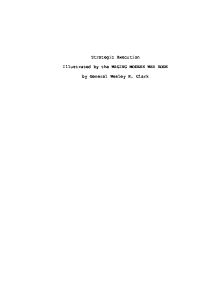 Strategic Execution Illustrated by the WAGING MODERN WAR BOOK by General Wesley K. Clark In WAGING MODERN WAR, GEN Wesley Clark writes, " we had started down a path that, as I was to discover, no government was prepared to acknowledge and for the which no military was able to fully prepare."1 (121) The Clinton administration/NATO did not effectively identify their diplomatic objectives and application of military resources to achieve those objectives in the Kosovo campaign. NATO applied diplomatic pressure haphazardly with no clear goal while military objectives were adjusted almost daily. Diplomacy at its best achieves a desired result or adjustment by a country without the outright application of military force. Of course this assumes a massing effect of a clear goal not demonstrated by the administration before and during the Kosovo Campaign. Early on President Milosevic presented a dire threat to ethnic Albanians living in Kosovo that was already acknowledged by many NATO members. The German representative indicated that a line must be drawn "a clear red line", but in fact no government was prepared to draw that line for the Serbs.2 (112) ...read more.

Suitability or adequacy of the diplomatic plan was not accomplished during the Kosovo campaign. Discussions were made early that the threat of military action would be used to support the overall diplomatic effort with Milosevic. However as GEN Clark states in his book several times that once the single diplomatic effort failed and force was applied then diplomacy simply stopped. Secretary Albright is recorded saying, "Yes," she said, "but who's going to carry the message in? Certainly not the Americans, and not our Allies."5 (253) NATO's efforts were focused on solving the humanitarian problems created by Serbian ethnic cleansing both internally and externally in the region.6 (435) Unfortunately slow commitment to a diplomatic course of action allowed Serbia to continue their actions without any fear of retribution by NATO. "I had no doubts about what we had to do on the military side, but a number of us had begun to ask in private about the political goals of the campaign."7 (108) ...read more.

In short the campaign was not suitable as initially planned within the parameters of NATO, which initially focused on the human atrocities. "Publicly ruling out a ground effort at the outset took away the threat of decisive maneuver and offensive action..." wrote GEN Clark.10 (425) I believe that it was the will to complete the tasks and ultimate fear by politicians that NATO might fail that drove the military plan to a completion that some would argue was in fact a success. The administration and NATO did not completely nest their diplomatic and military operations to achieve their goals in operation ALLIED FORCE against Kosovo. Objectives were not initially identified and clearly articulated before operations began. Diplomacy backed by force was the mantra of NATO, but diplomacy was all but forgotten. GEN Clark admits in his writing that they as the executors of the plan were not comfortable with the diplomatic process and unsure of the political endstate. The actions in Kosovo illustrate a strong case to define the political goals and objectives to drive military action with an endstate. 2 ...read more.