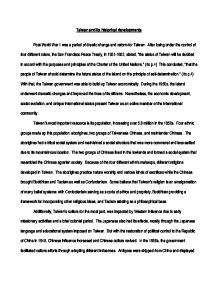 Taiwan and its historical developments.

Taiwan and its historical developments Post-World War II was a period of drastic change and reform for Taiwan. After being under the control of four different rulers, the San Francisco Peace Treaty, in 1951-1952, stated, "the status of Taiwan will be decided in accord with the purposes and principles of the Charter of the United Nations." (Ito p.4) This concluded, "that the people of Taiwan should determine the future status of the island on the principle of self-determination." (Ito p.4) With that, the Taiwan government was able to build up Taiwan economically. During the 1950s, the island underwent dramatic changes and improved the lives of its citizens. Nevertheless, the economic development, social evolution, and unique international status present Taiwan as an active member of the international community. Taiwan's most important resource is its population, increasing over 5.8 million in the 1950s. Four ethnic groups made up this population: aborigines, two groups of Taiwanese Chinese, and mainlander Chinese. The aborigines had a tribal social system and maintained a social structure that was more communal and less settled due to its mountainous location. The two groups of Chinese lived in the lowlands and formed a social system that resembled the Chinese agrarian society. Because of the four different ethnic makeups, different religions developed in Taiwan. ...read more.

Sadly, the Dutch exploited the Han serfs. It was the Han pioneers who gave their blood and sweat to transform wilderness into farmland, but the land and the products of their labor belonged to the Dutch monarch. In addition, their earnings were given order in the form of rent or taxes known as "the king's field." Aside from exploiting the Hans, the Dutch system of colonial rule created mercantilist production and circulation of commodities system. The Dutch forced the Han pioneers to produce commodities which best suited Dutch export requirements. This included sugar, rice, buckskin, camphor...etc. and immensely profited colonial rulers. This pattern of production in Taiwan contained many elements of early capitalism's self-sufficiency in production of merchandise goods and allowed Taiwan's entrance in trade. The Dutch used Taiwan as a center for import, export, collection, and distribution of goods from the various areas of Asian, and they, in result, gained tremendous profits from the island. Profits from Taiwan trade accounted for 26.5% of total from all of Asia for the Dutch. Taiwan's influence by capitalism and implementation of a class society initiated from the beginning of foreign penetration. Dutch colonialism made up early Taiwan's two major social classes: large and small unit leaders, and pioneer serfs, fishermen, and salt-producers. Dutch's occupation in Taiwan brought in remarkable profits in Holland. ...read more.

In 1945, Nationalist Chinese authorities assumed political control over Taiwan. Initially, the Taiwanese were glad to get rid of the Japanese, but soon joy turned into sorrow and anger as the newcomers from China turned out to be corrupt, repressive, and uncivilized. The Nationalist regime was seen as a carpetbegger government. Taiwanese had little voice in the political decision-making. Taiwan's well-being, public health standards, and morale began to decline precipitously while the education system deteriorated. Tensions existed between the Taiwanese and the mainlanders. Taiwanese were seen as traitors while mainlanders were regarded as dirty, dishonest, and technologically backward. Ill feelings led to unrest and uprising. It wasn't until 1947 that Chiang Kai-Shek, in order to solve problems, made Taiwan a province, rescinded military rule, appointed Taiwanese to official positions. Government enterprises were sold and efforts were made to alleviate unemployment. But considerable damage had already been done. Taiwanese hatred towards Mainland Chinese and its country would not soon subside. From the beginning of Dutch colonization till the end of WWII, Taiwan developed through four different forms of government. Utilized as an economic asset, Taiwan has been claimed and reclaimed, resulting in an ancestral heritage composed of immigrants from a plethora of regions in earlier generations. Consequently, Taiwan has never had the opportunity for self-determination. The political, economic, and social development of Taiwan is an amalgamation of multiple areas around the world, generating a history of both positive and negative influences leading Taiwan to its contradictory status. ...read more.