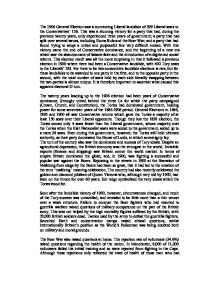 The 1906 General Election saw a convincing Liberal landslide of 399 Liberal seats to the Conservatives' 156.

The 1906 General Election saw a convincing Liberal landslide of 399 Liberal seats to the Conservatives' 156. This was a stunning victory for a party that had, during the previous twenty years, only experienced three years of government; a party that had split over several issues, including Home Rule and the Boer War; and a party that had found trying to adopt a united and purposeful line very difficult indeed. With this victory came the end of Conservative dominance, and the beginning of a new era which saw the abandonment of laissez-faire and the introduction of enlightened social reform. This election result was all the more surprising in that it followed a previous election in 1900 where there had been a Conservative landslide, with 402 Tory seats to the Liberals' 183. For there to be two consecutive landslide elections is rare, but for these landslides to be awarded to one party in the first, and to the opposite party in the second, with the total number of seats held by each side literally swapping between the two parties is almost unique. It is therefore important to ascertain what caused this apparent electoral U-turn. The twenty years leading up to the 1906 election had been years of Conservative dominance. Strongly united behind the three Cs for which the party campaigned (Crown, Church, and Constitution), the Tories had dominated government, holding power for some seventeen years of the 1886-1906 period. General Elections in 1886, 1895 and 1900 all saw Conservative returns which gave the Tories a majority of at least 150 seats over their Liberal opponents. ...read more.

The Conservatives did try to deal with the problems raised by the Boer War. However, the reforms they introduced upset key sections of British society, adding to the general bad feeling felt towards the Conservative government. Key sections of society were upset by the varied reforms. The Military Reform Act, for example, was considered as achieving too little too late, and was seen more as an admission of guilt on the part of the government for their previous incompetence. It in no way appeased the loss experienced by the families of the 22,000 dead British soldiers. The non-conformists were upset by two Tory reforms. The Education Act upset them as it saw Church schools receiving assistance from rates. Given that non-conformists would not send their children to Anglican schools, this use of part of their rates was highly upsetting. 70,000 ratepayers were prosecuted for non-payment of rates, many of whom were disgruntled non-conformists who refused to pay their rates on a matter of principle. Such anger stirred the non-conformist voters who had remained dormant in the 1900 election (an apathy felt at the overwhelming inevitability of a Tory success) into action. The Sevenoaks by-election of September 1902 witnessed such action and demonstrated how powerful motivated non-conformists could be at the polls. A Conservative strong-hold, the Tory majority was cut from 5,000 to 1,000 votes in the by-election. Non-conformists were also angered by the Licensing Act of 1904, because they felt that in only closing supernumerary pubs the act did not go far enough. Non-conformists wished to see all pubs closed down. ...read more.

Furthermore the Liberals actively worked to promote their anti-Tariff Reform line. Asquith adopted a successful 'Big Loaf, Little Loaf' campaign to attack Tariff Reform which proved remarkably effective in attracting votes. In the 1906 election the Liberals promoted themselves as the 'Free Fooders' and attacked the Tories as 'Dear Fooders'. The consequence was that the election saw an 8% rise in turnout, whilst in the result there was a definite swing towards the Liberals. The Liberal's anti-Tariff Reform campaign attracted the votes of former abstainers and new voters, and, in key Conservative strong-holds particularly in London, Lancashire, Yorkshire and North-East England, former Tory voters who defected to the Liberals in opposition to Tariff Reform. That the election was held over two weeks may have helped magnify the swing towards the Liberals as early Conservative losses may have influenced those voters whose constituency's contest came in the latter half of the election period. According to Churchill, the Tories lost the 1906 election due to their exhaustion. However, this 'Exhausted Inheritance' theory is clearly not the case. The reform brought through by the Tories between 1902 and 1905 is clear evidence that the Tories were not exhausted. Rather they split over Tariff Reform. At the same time, their policies were proving increasingly unpopular with the electorate. This split, and their increasing alienation from the public inspired a re-united Liberal Party which was able to promote itself as the Free Fooders. Dormant Liberal voters, new voters and alienated Tory voters moved towards the Liberal Party. The result of the election saw the re-emergence of a re-united Liberal Party that could viably (and successfully) compete with the Tory Party. As a consequence the Tory dominance of the previous twenty years, a combination of Tory strength and Liberal weakness, was ended. ...read more.