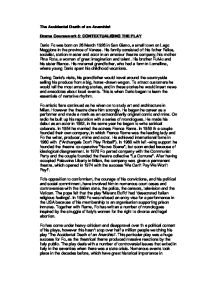 The Accidental Death of an Anarchist - Contextualising the play.

The Accidental Death of an Anarchist Drama Coursework 5: CONTEXTUALISING THE PLAY Dario Fo was born on 26 March 1926 in San Giano, a small town on Lago Maggiore in the province of Varese. His family consisted of: his father Felice, socialist, station master and actor in an amateur theatre company; his mother Pina Rota, a woman of great imagination and talent. His brother Fulvio and his sister Bianca. His maternal grandfather, who had a farm in Lomellina, where young Dario spent his childhood vacations. During Dario's visits, his grandfather would travel around the countryside selling his produce from a big, horse-drawn wagon. To attract customers he would tell the most amazing stories, and in these stories he would insert news and anecdotes about local events. This is when Dario began to learn the essentials of narrative rhythm. Fo artistic flare continued as he when on to study art and architecture in Milan. However the theatre drew him strongly. He began he career as a performer and made a mark as an extraordinarily original comic and mine. ...read more.

In 1980 Fo was refused an entry visa for a performance in the USA because of his membership to an organisation supporting prison inmates. Together with Rame, Fo has written a number of monologues inspired by the struggle of Italy's women for the right to divorce and legal abortion. Fo has come under heavy criticism and disapproval over the political content of his plays, however this hasn't stop over half a million people watching his play 'The Accidental Death of an Anarchist'. This particular play was a huge success for Fo, as the theatrical theme produced massive reactions by the Italy public. The play deals with a number of controversial issues that exited in Italy in the seventies when there was a state crisis. Numerous events took place in the decades before, which have great historical importance in explaining what happened in Italy. Unrest in Italy started with the rise of fascism, which is a political system, which developed in Italy and Nazi Germany during the 1920s and 30s. ...read more.

It was thus confirmed that the instigators of the crime had been the organisation entrusted with 'protection' of the Italian state. This hypocrisy caused Fo to express his concerns about the situation in Italy. This play is based on the suspicious death of the railway worker, and continually mocks the government. Fo created this play using the tradition of Commedia Dell'Arte, to satire the officials and the right-wing authorities responsible for the abuse of power. Commedia Dell' Arte uses the concept of stock characters. Stock characters represented fixed social types. Actors have to project their characters emotions through the body. Leaps, tumbles, stock gags, obscene gestures and slapstick antics were incorporated into their acts. Movement is also essential in Fo's work, as the authorities became nervous of these notorious plays that commented on the wrongs of society. This meant that police were constantly present at performance, checking that the actors kept to the official scripts allowed by the government. Due to the strict censoring of scripts, Fo developed his movements. By exploiting his extraordinary range of gesture, facial expressions, variation of voice and accents, and his skill as a storyteller meant that he could still convey his messages effectively. ...read more.