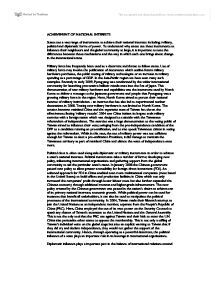 The Achievement of National Interests

ACHIEVEMENT OF NATIONAL INTERESTS States use a vast range of instruments to achieve their national interests including; military, political and diplomatic forms of power. To understand why states use these instruments to influence their neighbours and the global community at large, it is important to note the differences between these mechanisms and the way in which each one brings about change in the international arena. Military force has frequently been used as a deterrent and threat to fellow states. Use of military force may involve the publication of documents which outline future military hardware purchases, the public testing of military technologies or an increase in military spending as a percentage of GDP. In the Asia-Pacific region we have seen many such examples. Recently in early 2009, Pyongyang was condemned by the wider international community for launching provocative ballistic missile tests into the Sea of Japan. ...read more.

Political clout is often used along side diplomatic or military instruments in order to achieve a state's national interests. Political instruments take a number of forms; developing new policy, influencing international organisations and gathering support from the global community to aid the particular state's cause. In January 2008 the Chinese government passed new policy to allow greater accessibility for foreign direct investment (FDI). An softened approach for FDI in China enabled even more multinational companies (most based in the United States) to build offices and production facilities in China which not only increased the companies' profit through lower labour costs but also further expanded the Chinese economy through additional revenue and higher-grade infrastructure. The new policy created by the Chinese government was passed in the nation's desire to achieve one of its primary national interests; economic growth. While political power can be used for instances that benefit all stakeholders, it can also be used to manipulate the political processes of the international community. ...read more.

Diplomatic influence plays a important part in the balance of international relations around the globe. As Taiwan struggles for independence from the PRC, diplomatic instruments have been used by both sides to garner support for their own recognition. Notably, China has exercised its diplomatic power in states that recognise the ROC by closing the local Chinese embassy, and recalling the Chinese ambassador. These symbolic gestures carry a huge weight in the international community and are an effective measure to gain and maintain support and recognition. In July 2009, the arrest of Stern Hu, an Australian business man of Chinese origin hit the news-stand in Australia with quite an impact. Although Hu is currently yet to be charged, the incident and the intense political and diplomatic negotiations that surround it will not only decide the fate of Stern Hu, but also illustrate which of the two states involved can exercise the greater diplomatic authority. As states pursue their national interests, they use a plethora of military, political and diplomatic tactics to influence other states and manipulate the international community. ...read more.