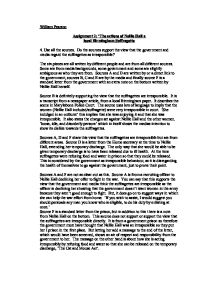 The actions of Nellie Hall alocal Birmingham Suffragette - Do the sources support the view that the government and media regard the suffragettes as irresponsible?

William Pearson Assignment 2: 'The actions of Nellie Hall a local Birmingham Suffragette 4. Use all the sources. Do the sources support the view that the government and media regard the suffragettes as irresponsible? The six pieces are all written by different people and are from all different sources. Some are from media backgrounds, some government and some are slightly ambiguous as who they are from. Sources A and D are written by or a direct link to the government, sources B, C and E are by the media and finally source F is a standard letter from the government with an extra note on the bottom written by Nellie Hall herself. Source B is definitely supporting the view that the suffragettes are irresponsible. It is a transcript from a newspaper article, from a local Birmingham paper. It describes the scene in Marylebone Police Court. The source uses lots of language to imply that the women (Nellie Hall included/suffragette) were very irresponsible in court. 'She indulged in an outburst' this implies that she was enjoying it and that she was irresponsible. ...read more.

But, it does go on to suggest ways in which she can help the war effort from home. 'If you wish to assist, I would suggest you should persuade any man you know who is eligible, to do his duty by enlisting at once.' Source F is a standard letter from the prison, but in addition to this there is a note from Nellie Hall on the bottom. This source does not support or support the view that the suffragettes are irresponsible directly. It is from a government prison so therefore the government must have thought that Nellie Hall was an irresponsible so they put her I prison in the first place. But letting her add a message to the end of the letter, which would have been screened, shows an air of respect and responsibility from the government to her. The message on the other hand is about how she is acting irresponsibly by refusing food and water so that she can be released on the temporary discharge, 'The Cat and Mouse Act'. ...read more.

The head line from the article ' FED BY FORCE HOW THE GOVERNMENT TREATS POLITICAL OPPONENTS IN PRISON' and is a statement from a Mrs. Mary Leigh, a suffragette prisoner in Birmingham. The source is littered with quotes from conversations with prison officers about how he was going to force feed her and if she refused by mouth then it was up to him to decide how, namely through the nostrils. Both were said to be a very mentally and physically destroying experience. This source shows how the media do not support the view that the women are irresponsible but the government are and from the government's point of view, the women are being negligent of their bodies and their lives. Overall I think that all the sources are biased towards one side or another so I cannot draw an exact conclusion and also from all the sources there is no definite trend to wards one side or another. From the sources I think generally the government sees the suffragettes as irresponsible but as the media sources are so biased I cannot say whether the media as a whole supports the idea that they are irresponsible members of the community. ...read more.