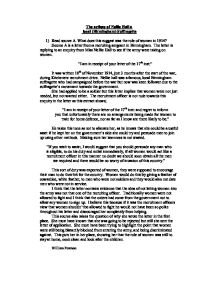 The actions of Nellie Hall a local (Birmingham) Suffragette 1) Read source A. What does this suggest was the role of women in 1914? Source A is a letter from a recruiting sergeant in Birmingham. The letter is replying to an enquiry from Miss Nellie Hall to see if the army were taking on women. "I am in receipt of your letter of the 17th inst:" It was written 18th of November 1914, just 3 months after the start of the war, during Kitcheners recruitment drive. Nellie hall was a famous, local Birmingham suffragette who had campaigned before the war but now was keen follower due to the suffragette's movement towards the government. ...read more.

He takes this tone as not to alienate her, as he knows that she could be a useful asset if he kept her on the government's side she could try and persuade men to join up using other methods. Making sure her keenness is not wasted. "If you wish to assist, I would suggest that you should persuade any man who is eligible, to do his duty and enlist immediately, if all women would act like a recruitment officer in this manner no doubt we should soon obtain all the men we required and there would be no worry of invasion of this country." ...read more.

I believe this because if it was the recruitment officers view that women shouldn't be allowed to fight he would not have been so polite throughout his letter and discouraged her completely from helping. This source also raises the question of why she wrote the letter in the first place. She must have known that she was going to be rejected but still she sent the letter of application. She must have been trying to highlight the point that women were still being blatantly blocked from entering the army, and being discriminated against. This puts her in her place, showing her that the role of women was still to stay at home, cook clean and look after the children. William Pearson ...read more.