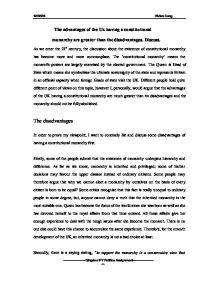 The advantages of the Uk having a constitutional monarchy are greater than the disadvantages. Discuss.

Support the monarchy is too costly indeed. Although the royal has agreed to pay tax since a couple of years ago, the situation still has not changed a lot. But at least, they show a positive attitude to us that they tend to be more equal as other people. And lots of evidences also can counter-attack these criticisms' view. Because they are not only spending but there is also some revenue from them. A good illustration of this point is the monarchy stimulates the development of tourist industry. The monarchy often attends many social and national ceremonies, trooping the colour, opening of Parliament. Together with her royal buildings, it has become many local and foreign visitors' ideal destination. Every year, it makes thousands of millions pounds that could easily cover the expenses of the royal family. Beside the above three disadvantages that I could argue about, there are still a few other weaknesses. For example, as the UK has become a multi cultural country, more and more people will have quite different regional beliefs. So the function of the monarchy as the defender of the faith is no longer appropriate, because she defends Christian faith only. What is more, the death of Princess Diana also seriously destroyed the royal image of the royal family in some aspects. From what I discussed above, we may easily find out the existence of constitutional monarchy has many disadvantages. ...read more.

It is obviously one of her smart advantages; no elected politicians can do that because they may be easily eliminated through selection that will be held every four years. From this aspect, we can say that the monarch not only an excellent spokeswoman of the UK, but also an experienced head of the commonwealth. Thirdly, the monarchy is currently popular. A recent poll demonstrates that 'the monarchy was very popular among the over-60s'xi. So it is unrealistic for us to get rid of monarchy nowadays, because the elderly constitute amounts a large part of the overall population. Another point I want to argue is that the monarchy is inherited, not like the other politicians who are probably elected in the elections by winning less than 50 percent of the overall votes and who represent less than half of the people. So the monarchy could win more support than the elected politicians. To sum up, from what I discussed in this essay, we can realise that the advantages of the monarchy are far more important and vital than its disadvantages. So we may safely arrive at the conclusion that the monarchy is running smoothly and the existence of monarchy is quite reasonable, hence we should support her work continuously instead of trying to abolish it. Yet, from my point of view, the monarchy still need to reform in some places to achieve more support, such as changing into a European style and more modern royal family and etc. ...read more.