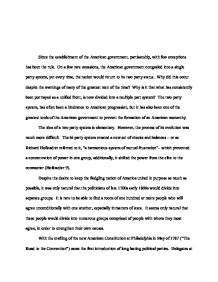 Since the establishment of the American government, partisanship, with few exceptions has been the rule. On a few rare occasions, the American government congealed into a single party system, yet every time, the nation would return to its two party status. Why did this occur despite the warnings of many of the greatest men of the time? Why is it that what has consistently been portrayed as a unified front, is now divided into a multiple part system? The two party system, has often been a hindrance to American progression, but it has also been one of the greatest tools of the American government to prevent the formation of an American monarchy. The idea of a two party system is elementary. However, the process of its evolution was much more difficult. The bi-party system created a new set of checks and balances - or as Richard Hofstadter referred to it, "a harmonious system of mutual frustration"- which prevented a concentration of power in one group, additionally, it shifted the power from the elite to the commoner (Hofstadter 9). Despite the desire to keep the fledgling nation of America united in purpose as much as possible, it was only natural that the politicians of late 1700s early 1800s would divide into separate groups. It is rare to be able to find a room of one hundred or more people who will agree unconditionally with one another, especially in matters of state. ...read more.

Its name, borrowed from the English, referred to the King's closest advisors who would meet in small rooms known at the time as cabinets (Garraty 120). The new cabinet was composed of Washington's most trusted advisors, friends, and patriots, all of whom were political children of the Revolution, and many of them eventually attained the presidency. Members of the cabinet included Alexander Hamilton, James Madison, James Monroe, Patrick Henry, John Adams, then the vice president, and Thomas Jefferson, as well as others (Brogan 213). Tensions ran high in the cabinet as Jefferson, father of the Democratic-Republicans, and Hamilton, a fervent leader of the Federalists, spared over many matters of state, from the relatively inconsequential, to Hamilton's economic policy. Eventually Jefferson resigned from his post in frustration. (The American Pageant The Young Reader's Guide to United States History 120, The Penguin History of the United States 213). In 1796, when George Washington announced that he would not seek a third term as president, a bitter political battle ensued (Bailey 193). The presidential election of the same year was to be fought between the two major political titans of the age, John Adams, a federalist from Massachusetts and Thomas Jefferson, father of the Democratic-Republicans, and a Virginia native. The campaign revolved around political stances, personality, and regional allegiances. In the end, Adams just barely defeated Jefferson in the Electoral College by the narrow margin of 71 votes for Adams to 68 votes for Jefferson (Bailey 194). ...read more.

Despite being a supporter of the French Revolution, an event synonymous with blood and decapitation, Jefferson actually preferred the smart, forward thinking, and peaceful solution to problems. He cut taxes, paid off the debt, and more than doubled the territory of the United States, all this he did peacefully (Gonick 117). This was not, however, to say that he would hesitate to use force, as he had with the Barbary Pirates in the first few years of the 1800s (Malone 132). The American people loved their new president despite his failed attempts at an embargo, and his own hypocrisy. As a result, the Federalists, overcome by internal strife, corruption, the loss of its leader - Hamilton had been killed in a duel with the once vice-president, Aaron Burr - and its failure to listen to the wants of the American people, finally crumbled, thereby handing the power over to common people (Gonick 116). (The Cartoon History of the United States 116-117, The Penguin History of the United States 255, Thomas Jefferson and His World 132). Although the Federalist party had broken down and the Democratic-Republicans were the dominant political party by 1808, by 1824, with the election of Jackson to power, the American populous had once again come to see the wisdom of a two party system. Conceptually, a two party system may seem to be divisive and an impediment to the democratic process. In reality, the idea of a multi-party organization is crucial to the democratic process. It not only allows for numerous points of view to be represented in government, it is fundamental to the system of checks and balances. ...read more.