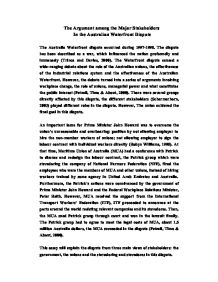 The Argument among the Major Stakeholders In the Australian Waterfront Dispute.

The Argument among the Major Stakeholders In the Australian Waterfront Dispute The Australia Waterfront dispute occurred during 1997-1998. The dispute has been described as a war, which influenced the nation profoundly and immensely (Trinca and Davies, 2000). The Waterfront dispute caused a wide-ranging debate about the role of the Australian unions, the effectiveness of the industrial relations system and the effectiveness of the Australian Waterfront. However, the debate turned into a series of arguments involving workplace change, the role of unions, managerial power and what constitutes the public interest (Petzall, Timo & About, 2000). There were several groups directly affected by this dispute, the different stakeholders (Schermerhorn, 2003) played different roles in the dispute. However, The union achieved the final goal in this dispute. An important issue for Prime Minister John Howard was to overcome the union's unreasonable and overbearing: position by not allowing employer to hire the non-member workers of unions; not allowing employer to sign the labour contract with individual workers directly (Robyn Williams, 1998). ...read more.

Concerning this, the MUA got support from ITF, however it did not get real support from other labour unions and sympathy from Australian society. If so, I believe that the MUA can make the Patrick group give more concessions in the dispute. From the stevedoring and stevedores' view, the dispute began from the MUA stopping work, the Patrick group and stevedores fired the workers immediately. At that time, the Howard Government and Patrick continued a media campaign about 'lazy and over-paid warfies' holding Australia to danger (Petzall, Timo & About, 2000). So Patrick group and stevedores believed that the government could manage it very efficiently. At the same time, the NFF had planed and implemented to set up a new stevedoring company to train stevedores and run stevedoring operations on docks leased from Patrick. However, when the dispute entered into the legal process, the situation changed to be propitious to MUA. ...read more.

The role of the boycott has been seen to be less effective that what was challenged by 'peaceful pickets' (Steve O'Neill, 1998). However, not all future industrial disputes can able to mass organisations as what has been the same situation in the waterfront dispute. This dispute is a heated industrial contest. It will have significance because of the in-depth debate on waterfront efficiency and productivity and also because of its implications for the conduct of general industrial relations. Reference list Australia Dockers Arrested at Barricades, 1998 http://southmovement.alphalink.com.au/southnews/syd-april14.htm accessed on 30/08/03 Gang Xiao, The Labour Class is the Leading Class, 2002 http://www.cc.org.cn accessed on 30/08/03 Helen Trinca, Waterfront: the battle that changed Australia, 2000, Transworld Publishing, Milsons Point, N.S.W John R. Scherhorn Jr, John Campling, David Poole, Retha Wiesner, Management: An Asia-Pacific Perspective, 2004. John Wiley & Sons Australia Ltd, Queensland. Petzall, S., Timo, N. & About, K. The Australian Waterfront Dispute, 1998, (2000) Australian Industrial Relations in a South East Asian Context, Eruditions Publishing, Melbourne. Robyn Williams, Australia's Waterfront Dispute, 17/05/1998 http://www.abc.net.au/rn/science/ockham/default.htm accessed on 30/08/03 Steve O'Neill, Outline of the Waterfront Dispute 12/05/1998 http://www.aph.gov.au/library/pubs/cib/1997-98/98cib15.htm#Some accessed on 30/08/03 ...read more.