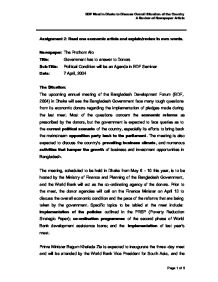 Assignment 2: Read one economic article and explain/review in own words. Newspaper: The Prothom Alo Title: Government has to answer to Donors Sub-Title: Political Condition will be an Agenda in BDF Seminar Date: 7 April, 2004 The Situation: The upcoming annual meeting of the Bangladesh Development Forum (BDF, 2004) in Dhaka will see the Bangladesh Government face many tough questions from its economic donors regarding the implementation of pledges made during the last meet. Most of the questions concern the economic reforms as prescribed by the donors, but the government is expected to face queries as to the current political scenario of the country, especially its efforts to bring back the mainstream opposition party back to the parliament. The meeting is also expected to discuss the country's prevailing business climate, and numerous activities that hamper the growth of business and investment opportunities in Bangladesh. The meeting, scheduled to be held in Dhaka from May 8 - 10 this year, is to be hosted by the Ministry of Finance and Planning of the Bangladesh Government, and the World Bank will act as the co-ordinating agency of the donors. Prior to the meet, the donor agencies will call on the Finance Minister on April 13 to discuss the overall economic condition and the pace of the reforms that are being taken by the government. ...read more.

It is no doubt that these are also burning questions which are supposed to be solved at the parliament. It proves that our parliament is not functioning properly to solve this issue. However the government must answer to these issues not only in front of the donor but also to the public as a whole. The Issues a. Current political conflict resolution: At this moment there is a political conflict going on throughout the country. This political conflict deteriorates the law and order of the country. The government must be liable for not being able to tackle the situation. b. Bringing opposition to parliament: The main opposition party of the country is out of the parliament for a long time. The government could not initiate any fruitful policy for bringing them into the parliament. c. Opposition strike (Hartal) and government reaction: Being the most undesirable thing, hartal is being used as a weapon for opposition party for a long time. It was possible for the government to come up with a law protesting hartal by any party in the future. d. Good governance: Establishing good governance is a major issue of the donors for a long time. They want to ensure that their money is being utilized at the right place. ...read more.

l. Separating legislation department: Government has always an influence on judiciary body as the legislation department is not separated from the government. m. Human rights commission: To ensure the human right the government is suggested by the donors to establish a human rights commission. The government is going to be asked about the advancement they made in establishing the commission. n. Ombudsman: Employing an ombudsman was a major commitment of the government. The government will be asked about the progress they made in this regard. o. Use of donor fund: The government is accountable for the use of donor fund. Donors will question the government on this issue. p. Privatization: There are many state owned companies which are running loss for a long time. A major reason behind their loss is corrupted management. Donors have suggested privatizing these companies in order to improve the management and operation. q. Foreign Direct Investment (FDI): FDI acts as a measure of countries overall investment situation and the economy. An increasing FDI shows an improved economy of the country. Finally it must be noted that our government can bargain with the donors for the market access to their countries instead seeking fund from them. A market access to the world will boost the economy as well as create more employment. BDF Meet in Dhaka to Discuss Overall Situation of the Country A Review of Newspaper Article Page 1 of 5 ...read more.