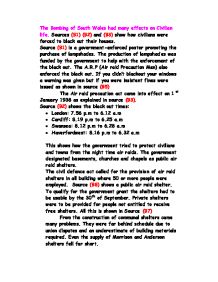 The Bombing of South Wales had many effects on Civilian life. Sources (B1) (B2) and (B3) show how civilians were forced to black out their houses.

The Bombing of South Wales had many effects on Civilian life. Sources (B1) (B2) and (B3) show how civilians were forced to black out their houses. Source (B1) is a government-enforced poster promoting the purchase of lampshades. The production of lampshades was funded by the government to help with the enforcement of the black out. The A.R.P (Air raid Precaution Men) also enforced the black out. If you didn't blackout your windows a warning was given but if you were insistent fines were issued as shown in source (B5) The Air raid precaution act came into effect on 1st January 1938 as explained in source (B3). Source (B2) shows the black out times: * London: 7.56 p.m to 6.12 a.m * Cardiff: 8.19 p.m to 6.25 a.m * Swansea: 8.12 p.m to 6.28 a.m * Haverfordwest: 8.16 p.m to 6.32 a.m This shows how the government tried to protect civilians and towns from the night time air raids. ...read more.

Some civilians had no choice whether to use a public shelter or not-if you were caught in an air raid attack you were ushered into the nearest public shelter by the A.R.P. The other type of air raid shelter, which was also popular, was the Morrison shelter. Unlike other air raid shelter these were placed in the home. They fitted in out of the way e.g. under a table, and were easy for people who didn't have gardens. You could fit up to five people in a Morrison shelter but they were manufactured to protect only two. Source (B6) shows a photo of a Morrison shelter. The main German targets in South Wales were transmitting stations and docks. Source (B9) shows the transmitting stations bombed during the air raids. The places largely hit included Birmingham, London and Cardiff. Many civilians died or were Seriously injured during the bombing of the docks. ...read more.

was taken from a local Swansea newspaper. They both talk of the same air raid, which had such dramatic effects on civilians in Swansea. Source (B13) would have been used to boost German morale and it used to show success. Source (B14) it a very emotional piece and emphasises the deaths. Both are very biased reports and were used to keep up the war effort. Civilians also had to help the Authorities put out the fires after the three night blitz of Swansea. Many civilians also become trapped in air raid shelters and would have to be rescued by the authorities Source (B15) They also had to stop people looting after bombing. People would steal things from houses in bombed areas - these people if caught were charged as shown in Source (B17). Overall the effects on civilians in South Wales due to bombing were devastating. Peoples' houses and worldly possessions were destroyed. They would emerge from air raid shelters not knowing what to expect Source (B16). Houses were virtually flattened. Bombs hit houses and managed to destroy whole streets. Devastation was extensive. ...read more.