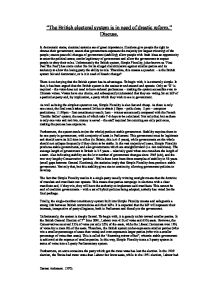 "The British electoral system is in need of drastic reform." Discuss. In democratic states, electoral systems are of great importance. Elections give people the right to choose their government; ensure that governments represent the majority (or largest minority) of the people; ensure peaceful changes of government (stability); allow people with fresh ideas an opportunity to enter the political arena; confer legitimacy of government and allow the government to expect people to obey their rules. Unfortunately the British system, Simple Plurality, (also known as 'First Past The Post') has come under fire for its alleged discrimination against smaller parties and its tendency to allow the losing party the ability to rule. Therefore, this creates a question - is the British system fair and democratic, or is it in need of drastic change? There is no denying that the British system has its advantages. To begin with, it is extremely simple. In fact, it has been argued that the British system is the easiest to understand and operate. Only an 'X' is required - the voter does not need to have ordered preferences - making the system accessible even to illiterate voters. Voters have one choice, and subsequently understand that they are voting for an MP of a particular party and, by implication, a party which they wish to see in government. As well as being the simplest system to use, Simple Plurality is also fast and cheap. As there is only one count, the final result takes around 24 hrs to obtain (10pm - polls close; 11pm - computer predictions; 11:30pm - first constituency result; 2am - winner announced) compared with the French 'Double Ballot' system, the results of which take 7-8 days to be calculated. Not only that, but as there is only one vote and not two, money is saved - the staff required for counting are only paid once, making the process less expensive. ...read more.

It is expected that the MP will represent their interests, irrespective of party allegiance, both in Parliament and directly to the government. Unfortunately, the system is deeply flawed. To begin with, it is grossly unfair toward smaller parties. In the British General Election of 7th June 2001, Labour won 41% of votes and 63% seats. However, the Conservatives received 33% of votes yet only 25% of the seats, while the Liberal Democrats won 19% of votes but a mere 8% of the seats. Therefore, the British system under-represents smaller parties (who win a smaller percentage of seats than votes) and over-represents larger parties (who win a smaller percentage of votes than seats). This is called the "distorting mirror effect", wherein stable government is achieved at the expense of smaller parties. In this way, Simple Plurality turns a 3-party system in terms of votes into a 2-party Parliamentary system. Furthermore, on some occasions the party which got the most votes has lost the election. In the 1929 election, the Tories had more votes than Labour but fewer seats, while in the 1951 election, Labour had more votes than Tories but fewer seats. Therefore, in some cases, the British system allows a government to rule which does not speak for the majority (or largest minority) of the people, thus directly undermining the definition of an electoral system. It is feared that this could happen again. Unlike European governments, British governments do not speak for a majority of their citizens. In fact, every government since 1945 has been elected on a minority vote. Examples of this can be found in the General Election results of 1979, where the Tories got 43.9% of the vote, and 1983, where they got 42.4% of the vote. On both these occasions, the majority of voters voted against the government, yet this government came to power - surely this is not a fair system at work? ...read more.

The British electoral system is also dangerous in that it worsens the geo-political divide, where political divisions coincide with geographical divisions. It is evident from the Regional Election results of June 1987 that the majority of Labour voters reside in Scotland, North England and Wales (i.e. the North and West), while most Conservative votes came from the South and East - Greater London etc. Therefore, the British electoral system reinforces the geo-political divide by over and under-representing certain parties. This reinforced divide could lead to more intense opposition between the two 'sides' and, potentially, internal conflict culminating in civil war. Finally, the British electoral system tends to discriminate against parties whose support is distributed evenly across the country. For example, in one election, the SDP got 3.5 million votes and 6 seats, whereas the Official Unionists (who only stand in NI) got 0.25 million votes and 11 seats. This is yet another unfairness in the system. In my opinion, the British electoral system is in need of drastic change. Simple Plurality may provide stable governments, but these governments tend to be elected on a minority of votes - they do not represent the majority of the people. In fact, not one British government since 1945 has been elected on a majority vote. Furthermore, the system may be quick, inexpensive and easy to use, but these are merely practicalities. Surely people would rather wait 7-8 days for a result if it represented the views of a majority of people. Essentially, the British electoral system is deeply unfair. It discriminates against smaller parties and parties whose support is distributed evenly across the country, while giving Labour voters more value for their vote than those who vote for the Tories or Lib Dems. The system even provokes political violence by reinforcing the geo-political divide. In conclusion, the British electoral system is unfair, discriminatory, potentially dangerous and does has a track record of failing to provide the British people with the government it voted for. Therefore, it undermines many aspects of the concept of an electoral system, and is in need of drastic reform. Darren Anderson. 13PD. ...read more.