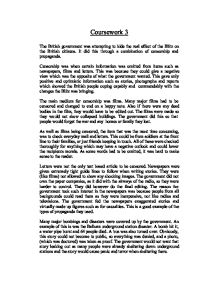 The British government was attempting to hide the real effect of the Blitz on the British citizens. It did this through a combination of censorship and propaganda.

Coursework 3 The British government was attempting to hide the real effect of the Blitz on the British citizens. It did this through a combination of censorship and propaganda. Censorship was when certain information was omitted from items such as newspapers, films and letters. This was because they could give a negative view which was the opposite of what the government wanted. This gave only positive and optimistic information such as stories, photographs and reports which showed the British people coping capably and commendably with the changes the Blitz was bringing. The main medium for censorship was films. Many major films had to be censored and changed to end on a happy note. Also if there were any dead bodies in the film, they would have to be edited out. The films were made so they would not show collapsed buildings. The government did this so that people would forget the war and any homes or family they lost. ...read more.

The government would not want that story leaking out as many people were already sheltering down underground stations and the story would cause panic and terror when sheltering there. Propaganda is when information is designed and published for the public to read in an attempt to influence people's ideas. In the second world war the government produced all of it. It tried to make everybody believe in a certain point of view. The government were also known to have changed and edited pictures and photos. The most famous photo of the war, was one of St. Paul's Cathedral in flames. This was actually exaggerated with extra effects such as more smoke and flames to make it look more dramatic. I interpreted this as the government trying to show people that though everywhere was bombed, and everybody was going through it at the same time, everybody could still pull through, just like St Paul's sticking strongly out of the middle of a fire. ...read more.

Going to the cinema was a major part of the everyday life for British people, and the government took advantage of this. As I mentioned earlier, a lot of the film was censored, but furthermore an extra clip of about 20 minutes was played before the main film started. The clip contained pictures of the war, of course with Britain beating the Germans. This again raised morale throughout Britain with many people believing that Britain had a major upper hand in the war. The clips were accompanied by music. This could be requested by war veterans, or someone that had played a large part in the war effort. I believe in some ways the government's Propaganda was dishonest, but if they had not distributed it, the British citizens could have ended up in panic or even eventually lose interest in the war and all hope of winning it. If the government had not used their initiative in censorship and propaganda then Britain could well be under German rule today. ?? ?? ?? ?? ...read more.