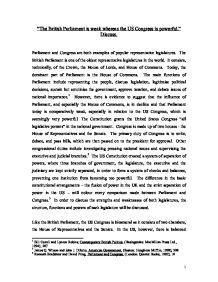 &quot;The British Parliament is weak whereas the US Congress is powerful.&quot; Discuss.

"The British Parliament is weak whereas the US Congress is powerful." Discuss. Parliament and Congress are both examples of popular representative legislatures. The British Parliament is one of the oldest representative legislatures in the world. It consists, technically, of the Crown, the House of Lords, and House of Commons. Today, the dominant part of Parliament is the House of Commons. The main functions of Parliament include representing the people, discuss legislation, legitimise political decisions, sustain but scrutinise the government, approve taxation, and debate issues of national importance.1 However, there is evidence to suggest that the influence of Parliament, and especially the House of Commons, is in decline and that Parliament today is comparatively weak, especially in relation to the US Congress, which is seemingly very powerful. The Constitution grants the United States Congress "all legislative powers" in the national government. Congress is made up of two houses - the House of Representatives and the Senate. The primary duty of Congress is to write, debate, and pass bills, which are then passed on to the president for approval. Other congressional duties include investigating pressing national issues and supervising the executive and judicial branches.2 The US Constitution created a system of separation of powers, where three branches of government, the legislature, the executive and the judiciary are kept strictly separated, in order to form a system of checks and balances, preventing one institution from becoming too powerful. ...read more.

Due to the strict whip system, the opposing parties will almost always vote against each other. This greatly increases the ease with which the government (usually possessing a clear majority) can pass their bills, and makes Parliament weaker in its ability to amend and reject bills. The fact that there is effectively only one main opposition party in Britain reinforces the division of parliament along party lines, and therefore its weakness.20 In addition, the British Parliament, particularly the House of Commons, has increased the use of special advisors. This means that unelected, unaccountable people are deciding policy, not the people's representatives in the House of Commons. Furthermore, these special advisors are increasingly allied to the government of the day. Therefore, Members of Parliament do not having a significant role in influencing bills, they vote on them according to their party line.21 In addition, Quasi-non-governmental-organisations (quangos) and executive agencies, such as benefits and pensions agencies, are not accountable to Parliament, which means the people's representatives cannot question their actions.22 Moreover, the existence of insider pressure groups means that the pressure group can influence government policy, but elected Members of Parliament rarely influence policy, they vote on it along party lines. There is however, the provision of Private Members' Bills, although this too can be shown to have minimal impact on the overall policy process. Of 584 Private Members Bills introduced in the 1987-1992 Parliament, most were never debated and only 65 (11%) ...read more.

still overturn a presidential veto.34 Unlike the British Parliament, or more specifically the House of Lords (being the highest court in the UK), the Supreme Court of the US can declare legislation unconstitutional. The Judicial Review of legislation by federal courts is therefore very effective in checking the power of Congress. The coequal status of the House of Representatives and the Senate in the Constitution also checks the power of Congress, as the possible difference in opinion on legislation in both houses limit the legislature's capacity to make decisions on policy.35 Parliament holds several key roles, representation, legislation, scrutiny and influence of the executive, and debate on issues of national importance. Although there is evidence to show that the influence of Parliament is in decline, particularly due to the growth in power of the executive, the doctrine of parliamentary government (where government is drawn from, located in and accountable to Parliament) remains fundamental, since it is the way in which the system is made democratic and legitimates the governments rule of the country by holding it accountable.36 Although it is no longer influential in terms of legislating, and even in scrutinising the actions of the executive, Parliament is still an important body despite it weakness. Parliament can therefore be defined primarily as the institution that remains to safeguard parliamentary democracy and hold the government accountable for its actions. In relation to the UK Parliament, the US Congress is considerably more powerful. ...read more.