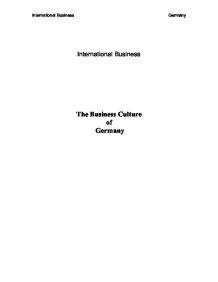 The Business Culture of Germany

International Business The Business Culture of Germany Geography and Demography Located in: Central Europe Bordered by: The Baltic Sea, The North Sea, The Netherlands, Poland, Denmark , France, Czech Republic, Switzerland, Austria, Belgium, Luxembourg Landscape: Low and high mountain ranges are interspersed with upland plains, terrace country, hilly regions and lakelands as well as wide, open lowlands. From north to south Germany is divided into five regions with different topographical features: the North German Plain, the Central Upland Range, the terrace panorama of the southwest, the Alpine foothills in the south and the Bavarian Alps. Climate: Temperate and marine, cloudy, wet and cool winters and summers; occasional warm winds Population: 82,424,609 (July 2004 est.) Capital: Berlin Languages: 99% of the population speaks German, although there are many dialects spoken in the various regions. Ethnic groups: The "Other" segment is made up of Greek, Polish, Italian, Russian, Serbo-Croatian and Spanish migrants. Religions: 1. The Catholic and Protestant churches contributed to social and political development. 2. Today, they publish documents and take part in debates on issues like peace and disarmament and labor market policy, abortion and protection of the environment. 3. The relationship between church and state is that of a partnership, regulated by concordats and agreements. 4. Around three million Muslims from 41 countries, most of them from Turkey form 2% of the population. 5. The Jewish communities have nearly 100,000 members and the largest Jewish community in Germany exists in Berlin with more than 11,000 members. ...read more.

21. The customary way to answer a phone at a German company is to state the name of the company, the name of the person answering the phone, and a greeting. 22. Support all statements with facts and figures. Keep the language simple and direct. Avoid glitzy promotion. Instead stick to technical data. 23. If in doubt, seek clarification immediately. This will be appreciated. 24. Practice diplomacy whenever you can, especially if the other party is not prepared or in a position to do it himself/herself. Any attempts to be aggressive or confrontational with a sizeable German company are counter-productive. 25. Do not expect decisions to be made at the negotiating table. Decision-making is protracted and intractable. 26. Do not directly address a person without being introduced first. Germans prefer third-party introductions. Interview with Jaya SV at Daimler-Chrysler, Bangalore Jaya went to Stuttgart for a month on business. "They are so serious, I feel like I'm giggling all the time even if I am just trying to be friendly. Germans can't do small talk! But they are very thorough in their work. And the autobahn is the best driving experience ever. It is highway heaven." Interview with Jayesh Menon at Honeywell, Bangalore Jayesh went to Mannheim for 2 weeks on business. "I hated the food. It's very difficult to get vegetarian food. And everyone keeps drinking beer, even at lunch. But work was good. Everything got over on time. So I could leave work early and didn't have to work weekends. So I got to see the country a little bit. Very beautiful. Very, very clean. ...read more.