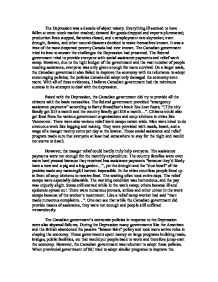 The Depression was a decade of abject misery. Everything ill seemed to have fallen at once: stock market crashed; demand for goods dropped and exports plummeted; production lines stopped, factories closed, and unemployment rate skyrocket; even drought, famine, and other natural disasters decided to make themselves known. It was a time of the most desperate poverty Canada had ever known. The Canadian government tried its best to answer the challenges the Depression had presented. The federal government tried to provide everyone with social assistance payments and relief work camp. However, due to the tight budget of the government and the vast number of people needing assistance, everyone was only given enough for mere survival. On a larger scale, the Canadian government also failed to improve the economy with its reluctance to adopt encouraging policies; the policies Canada did adopt only damaged the economy even more. ...read more.

However, the meager relief could hardly truly help everyone. The assistance payments were not enough for the monthly expenditure. The country families were even more hard pressed because they received less assistance payments "because they'd likely have a cow and a pig and a big garden...", yet the drought and the "dust bowl" of the prairies made any meaningful harvest impossible. In the cities countless people lined up in front of soup kitchens to receive food. The waiting often took entire days. The relief camps were especially debatable. The working condition was horrendous, and the pay was unjustly slight. Some still starved while in the work camp; others became ill and epidemic spread out. There were numerous protests, strikes and other unrest in the work camps because of the worker's resentment. Like a relief camp worker had said "men made numerous complaints...". ...read more.

This coupled with an already dropping demand for such agricultural goods made Canadian export plummet. The federal government's flawed policies did not improve the economy at all. People were very disappointed and resentful, their mood plainly represented in the multitude of strikes and protests nationwide. In the Depression the Canadian government did try very hard to lead the country through the hard times. Through the soup kitchens, the assistance payments and the relief camps nation wide, the government provided everyone with the basic necessities. However, because of the lack of resources on the government's part and the number of people needing assistance, there was never enough for everyone and people still suffered considerably. The Canadian government also failed to adopt intelligent policies to ameliorate the economy; whatever policies the government did implant only harmed the economy even more. All of those show that the Canadian government had only minimum success in dealing with the Depression. ...read more.