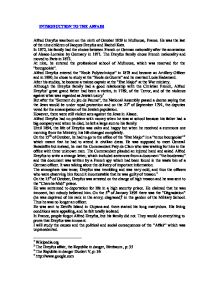 INTRODUCTION TO THE AFFAIR Alfred Dreyfus was born on the ninth of October 1859 in Mulhouse, France. He was the last of the nine children of Jacques Dreyfus and Rachel Katz. In 1872, his family had the choice between French or German nationality after the annexation of Alsace-Lorraine by Germany in 1871. The Dreyfus family chose French nationality and moved to Paris in 1872. At nine, he entered the professional school of Mulhouse, which was reserved for the "bourgeoisie". Alfred Dreyfus entered the "Ecole Polytechnique" in 1878 and became an Artillery Officer and in 1890, he chose to study at the "Ecole de Guerre" and he married Lucie Hadamard. After his studies, he became a trainee captain at the "Etat Major" at the War ministry. Although the Dreyfus family had a good relationship with the Christian French, Alfred Dreyfus' great grand father had been a victim, in 1789, of the Terror, and of the violence against what was regarded as Jewish usury.1 But after the "Serment du jeu de Paume", the National Assembly passed a decree saying that the Jews would be under royal protection and on the 21st of September 1791, the deputies voted for the emancipation of the Jewish population. However, there were still violent acts against the Jews in Alsace. Alfred Dreyfus had no problem with money when he was at school because his father had a big company and when he died, he left a large sum to his family. Until 1894, the life of Dreyfus was calm and happy but when he received a summons one morning from the Ministry, his life changed completely. On the 15th of October, he had to go to the office of the "Etat Major" in a "tenue bourgeoise"2 which meant that he had to attend in civilian dress. He was supposed to meet General Boisdeffre but instead, he met the Commandant Paty de Clam who was waiting for him in the office with three unknown men. ...read more.

He vainly tried to convince his superiors, Generals de Boisdeffre and Gonse. In June 1897, Picquard told his childhood friend, the lawyer Louis Leblois, of his conviction of the innocence of Dreyfus and the guilt of Esterhazy. In July, Leblois visited Scheurer-Kestner and showed him Picquard's secret report. In October, the French President F�lix Faure received Scheurer-Kestner, who declared to him his conviction of Dreyfus' innocence. On the 15th of November, 1897 Matthieu Dreyfus sent to the War Minister, the General Block a complaint against the Commandant Esterhazy whom he accused formally of being the author of the "bordereau". An inquiry on Esterhazy opened under the direction of the General de Pellieux, who concluded his report " in all honesty, Esterhazy seems to be correct ... Picquard seems guilty ..."10 At the end of November, 1897, Zola published an article which ended with these words: " truth is on the march, and nothing will stop it. "11 On January 13th, 1898, Picquard was condemned to 60 days detention in a fortress, and Scheurer-Kestner was not re-elected as a vice president. On the same day, "L'Aurore" published Emile Zola's open letter to the President of the Republic for which Clemenceau had found a brilliant title: "J'accuse".12 On the 8th of August, 1899, after the demand for a retrial, there opened a second lawsuit against Dreyfus at Rennes' secondary school. On September 9th, Dreyfus was accused of "intelligence with the enemy" with extenuating circumstances, and condemned to 10 years in prison. On the 19th of September, at the request of Waldeck-Rousseau, and with the support of the Dreyfus family, the President of the Republic, Loubet, the pardon of Alfred Dreyfus. On the 12th of July 1906, the "Court de Cassation" dismissed the verdict of Rennes. Dreyfus was rehabilitated. He was reinstated in the army as a Major and raised to the dignity Officer of the "l�gion d'honneur" On July 11th, 1935, Lieutenant Colonel Alfred Dreyfus died. ...read more.