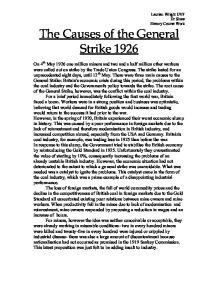 The Causes of the General Strike 1926.

The Causes of the General Strike 1926 On 4th May 1926 one million miners and two and a half million other workers were called out on strike by the Trade Union Congress. The strike lasted for an unprecedented eight days, until 12th May. There were three main causes to the General Strike: Britain's economic crisis during this period, the problems within the coal industry and the Government's policy towards the strike. The root cause of the General Strike, however, was the conflict within the coal industry. For a brief period immediately following the first world war, Britain faced a boom. Workers were in a strong position and business was optimistic, believing that world demand for British goods would increase and trading would return to the success it had prior to the war. However, in the spring of 1920, Britain experienced their worst economic slump in history. This was caused by a poor performance in foreign markets due to the lack of reinvestment and therefore modernisation in British industry, and increased competition abroad, especially from the USA and Germany. ...read more.

The government initially decided that the conflict between the mine owners and miners was not of their concern. But in 1925, the Trade Union Congress became involved and threatened a lock-out. In order to maintain control and appease the miners, the government responded by providing a twenty three million pound subsidy. A strike was temporarily avoided because both the miners- who were not receiving pay cuts- and the mine owners -who still had a reduction in the wages they paid the miners- were contented. But the subsidies were only for nine months. During this time the government set up the Samuel Commission to investigate the problems of British mining and discuss how best to increase its productivity. The report was published in 1926, it rejected nationalisation but recognised a need for modernisation, it also recommended that subsidies should be withdrawn and miners' wages cut. The government agreed to accept the report if both sides agreed with its findings. This was unrealistic as the report made suggestions which neither party were willing to agree to. So the report was no help to the situation at all and the conflict returned to the same position as before the government intervened. ...read more.

However, if the Samuel report had been enforced it would have just added further chaos to the dispute between miners and mine owners as neither side agreed with its findings. Baldwin was really in a no win situation. Therefore the government's response was more of a hindrance to the avoidance of a general strike than a cause, because by the beginning of May it can be argued that a general strike was inevitable. The combination of an economic crisis, a crippled coal industry and a poor government response led to the General Strike of 1926. British industry at that time was moribund and the government could have reacted more responsibly to the needs of the workers. But these were just additional problems to the underlying conflicts of the Coal industry rather than causes. The miners were already extremely unhappy because of their dire working conditions and because nationalisation had not taken place as promised, so when the mine owners proposed wage cuts they refused to co-operate. The poor treatment of the miners motivated the Trade Union Congress to act, without whom a General Strike would have been impossible. Laurian Wright UVF Dr Shaw History Course Work ...read more.