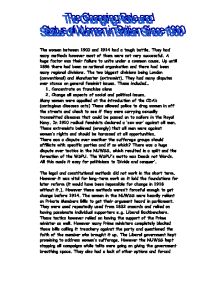 The changing role and state of women in Britain since 1900.

The women between 1900 and 1914 had a tough battle. They had many methods however most of them were not very successful. A huge factor was their failure to unite under a common cause. Up until 1896 there had been no national organisation and there had been many regional divisions. The two biggest divisions being London (conventional) and Manchester (extremist). They had many disputes over stance on general feminist issues. These included... 1. Concentrate on franchise alone 2. Change all aspects of social and political issues. Many women were appalled at the introduction of the CDA's (contagious diseases acts) These allowed police to drag women in off the streets and check to see if they were carrying sexually transmitted diseases that could be passed on to sailors in the Royal Navy. In 1910 radical feminists declared a 'sex war' against all men. These extremists believed (wrongly) that all men were against women's rights and should be harassed at all opportunities. There was a dispute over weather the sufferage groups should affiliate with specific parties and if so which? There was a huge dispute over tactics in the NUWSS, which resulted in a split and the formation of the WSPU. ...read more.

The financial sector was traditionally run by men however even this was starting to change and women were gradually being allowed to work for it. Women were also starting to go into universities. They however weren't allowed to get degrees to show for their hard work. The WSPU were drawing a lot of attention to the campaign. With their illegal tactics. Some attention they attracted was good attention however most of it was bad. The Tax evasion and Census resistance gained a lot of media coverage, especially the upper class women. They printed stories on the front page about famous men and women in England who were being thrown out of their houses because they refused to cooperate. They often chanted 'no-vote, no-census'. Other things that attracted publicity included cutting telegraph wires, burning messages into golf courses using acid ('no-vote, no-golf') and one particular woman known as slasher Mary walked into the National gallery and started cutting up paintings in protest to the forced feedings going on in the prisons. She stated ' You can get another picture, but you cannot get a life, as they are killing Mrs. Pankhurst. When imprisoned for other illegal activities many women went on hunger strike to protest against unfair detention. ...read more.

All this destroyed the largest argument that women could not die for their country. They could and they did. This also increased support due to the fact that women could actually work and gave the government an excuse to give women the vote without looking too soft. Other Reasons why WW1 was Important World War 1 removed almost all obstacles that were blocking the right for women to vote. It brought an end to militancy by the WSPU. When war broke out the WSPU called off all their militant campaigns. They became major supporters of the government and ironically focused all their efforts into helping the government rather than hindering them. Even though all suffragist groups did this most women took a pacifist stance. They started the infamous white feather campaign where they gave white feathers to all men not in military uniforms (to symbolise cowardice) they however never bothered to find out weather the men were actually in the military or not. The war created a general need for franchise reform. They had to make sure that all the men over 18 that had not been living in the country for more than 12 months due to the war needed to get the vote. This created a general need for a change and while they were at it they included the 8 million women that 'deserved' the vote. ...read more.