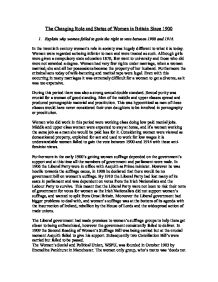 The Changing Role and Status of Women in Britain Since 1900

The Changing Role and Status of Women in Britain Since 1900 1. Explain why women failed to gain the right to vote between 1900 and 1914. In the twentieth century women's role in society was hugely different to what it is today. Women were regarded as being inferior to men and were treated as such. Although girls were given a compulsory state education 1870, few went to university and those who did were not awarded a degree. Women had very few rights under marriage, when a woman married; she and all her possessions became the property of her husband. Furthermore the criminal acts today of wife-battering and marital rape were legal. Even with this occurring in many marriages it was extremely difficult for a woman to get a divorce, as it was too expensive. During this period there was also a strong sexual double standard. Sexual purity was crucial for a woman of good standing. Men of the middle and upper classes spread and produced pornographic material and prostitution. This was hypocritical as men of these classes would have never considered their own daughters to be involved in pornography or prostitution. Women who did work in this period were working class doing low paid menial jobs. ...read more.

Fawcett used open air processions such as the 'Mud March' in February 1917, which the largest demonstration ever held up to that point. Over 3000 respectable women participated. However it could be argued that Fawcett and her organisation were too quiet and peaceful to make themselves be heard and for the government to be made to reform. Both these separate movements of the NUWSS and the WSPU did not help in achieving the vote sooner, as they were both travelling in different directions with their objectives. The movement was too fragmented and needed one united major movement. The leaders of the organisations had ideological differences. Fawcett believed women were morally superior to men and therefore would not lower themselves to their standard and use violence. On the other hand the WSPU believed that men were sexually exploiting women and in order to stop the sexual abuse they would have to use violence to fight back. As well as the NUWSS and the WSPU there were also too many separate organisations. They hindered the movement as they also had different aims. For example the East London Federation formed after splitting from the WSPU, because Christabel Pankhurst ran a very autocratic organisation. ...read more.

This meant nearly all the munitions workers were left without the vote.It was believed that women under 30 would be likely to support feminist or radical reforms. Overall the idea of women's role in society had changed but not yet to the extent of equality. Women were still underpinned by the male the government, who limited the vote as they were frightened of replaced by women. The bill allowing only women over 30 to be enfranchised was extremely unfair as most of the women contributing to the war effort were under this age. Nevertheless it was the first step to gaining equal franchine in 1928. The First World War certainly helped to raise the awareness of the women's suffrage cause as a credible one, by showing they could work as well as men. Furthermore the extinguinshing of militancy from the movement helped the public to realise sympathise with them and therefore give them their support. However some may say that the First World War was not the reason for reform because of several underlying issues. The government did not want to give women the vote because their work on the home front, but were forced to by enfranchising all the soldiers who served, By doing this and not recognises women's efforsts in the war they would have faced a huge resurgence in militancy. ...read more.