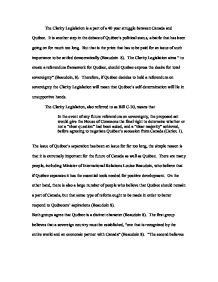 The Clarity Legislation is a part of a 40 year struggle between Canada and Qu&amp;eacute;bec.

The Clarity Legislation is a part of a 40 year struggle between Canada and Qu�bec. It is another step in the debate of Qu�bec's political status, a battle that has been going on for much too long. But that is the price that has to be paid for an issue of such importance to be settled democratically (Beaudoin 8). The Clarity Legislation aims " to create a referendum framework for Qu�bec, should Qu�bec express the desire for total sovereignty" (Beaudoin, 8). Therefore, if Qu�bec decides to hold a referendum on sovereignty the Clarity Legislation will mean that Qu�bec's self-determination will lie in unsupportive hands. The Clarity Legislation, also referred to as Bill C-20, means that In the event of any future referendum on sovereignty, the proposed act would give the House of Commons the final right to determine whether or not a "clear question" had been asked, and a "clear majority" achieved, before agreeing to negotiate Qu�bec's secession from Canada (Cariou 1). The issue of Qu�bec's separation has been an issue for far too long, the simple reason is that it is extremely important for the future of Canada as well as Qu�bec. There are many people, including Minister of International Relations Louise Beaudoin, who believe that if Qu�bec separates it has the essential tools needed for positive development. ...read more.

Whereas in Qu�bec laws of this nature cease to exist. Therefore if Qu�bec is successful in its separation from Canada, the two societies may eventually learn to accept one another because the aforementioned problems will no longer exist. The Clarity Legislation is not a positive step for Qu�bec, despite the attempts of the Chr�tien government to make it seem so. One of the most significant gestures of the federal government towards Qu�bec occurred when the government asked the Supreme Court of Canada "to rule on the legality of a unilateral declaration of independence by Qu�bec" (Montreal Gazette 6/23/2000). In the Canadian system, unlike the system in the United States, it is possible to ask The Supreme Courts opinion in a hypothetical situation. That is why a great number of people also think that, by formulating the questions in a way that would ensure it received the answers it sought, the Canadian government attempted to use its Supreme Court to give the impression that the Qu�bec referendum process was illegal. At the end of this exercise, the Supreme Court found that, in the event of a referendum win by Qu�bec sovereignists, the rest of Canada would have a constitutional obligation to negotiate Qu�bec's sovereignty (Beaudoin 9-10). In a CNEWS interview, Joe Clark spoke on his views on the Clarity Legislation. ...read more.

For those who believe that Qu�bec does not have what it takes to become it own country, here is some information on the actual economic state of Qu�bec. According to the OECD studies Qu�bec ranks seventeenth among the world's economies, which shows that it is a viable State. It also "expresses its modernity fully integrate with its French character, and despite the average size of its population, it is very competitive" (Beaudoin 12). Also Qu�bec is a democratic society. The National Assembly has provided the framework for the debates about Qu�bec's future and the people have made their voices heard through referendums. The Government has respected the people's decision every time and acted on their mandate (Beaudoin 12). The Clarity Legislation is a tactic used by the Canadian Government to try and maintain the upper hand in the continuous battle for Qu�bec's separation. It is an infringement on the democratic rights of Qu�becers. It is a Bill designed to make separation almost impossible for Qu�bec. Through the manipulation of the system, including the hypothetical questioning of the Supreme Court as well as the distribution of members in Parlaiment, the Canadian Government has been able to more or less guarantee its victory against the pro-independent movements. Therefore, if Qu�bec decides to hold a referendum on sovereignty the Clarity Legislation will mean that Qu�bec's self-determination will lie in unsupportive hands. ...read more.