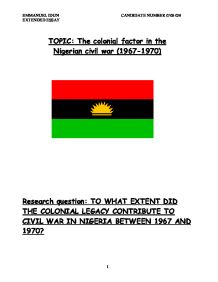 TOPIC: The colonial factor in the Nigerian civil war (1967-1970) Research question: TO WHAT EXTENT DID THE COLONIAL LEGACY CONTRIBUTE TO CIVIL WAR IN NIGERIA BETWEEN 1967 AND 1970? ABSTRACT Nigeria, one of the biggest British colonies in Africa became independent in 1960, but in 1967, the eastern region seceded and declared itself the republic of Biafra. The result was a three-year bloody civil war between the federal government and the secessionists leading to Biafra's defeat. Reasons put forward for this conflict include religious, tribal, cultural, geographical and economic factors. A school of thought however, believes the civil war resulted from the legacy of the British colonial policy and this essay examines the question HOW RELEVANT WAS THE POLICY OF THE BRITISH COLONIAL GOVERNMENT IN THE NIGERIAN CIVIL WAR BETWEEN JULY 1967- JANUARY 1970? The investigation focuses on the developments from three main time periods: the pre-colonial era, the colonial era and the postcolonial era, and examines those structures and legacies that contributed to the conflict. The colonial era appeared to have re-enforced the religious, tribal and historical divisions that existed in the pre-colonial era, added and gave new dimensions to the religious conflict. It also established some of the structure that gave rise to the post-independence economic divisions. The numerous divisions created over time brought tension and resulted in the military uprising in 1966. This was followed by a tribal massacre of the easterners who lived in northern Nigeria. This influenced the decision of the east to secede from the rest of the federation. For economic and political reasons, the federal government would not permit this, resulting in war. The state in which the British left the country no doubt contributed to the war. However, similar problems faced other African countries at independence but did not result into civil wars. It was Nigeria's failure to produce a national leader capable of uniting the country and healing its division that ultimately brought the war. ...read more.

THE POST-COLONIAL PERIOD The general census conducted in 1962 was alleged to be riddled with malpractices and inflation of figures of such astronomical proportions that the Eastern Region refused to accept the result. A second census was carried out in 1963, and even then the figures were accepted with some reservations. Meanwhile the people of the Middle Belt area of the North had grown increasingly intolerant of the NPC rule of the North. The Tiv, one of the major tribes in the Middle Belt, openly rioted for almost three years (1962 - 1965). Then came the biggest crisis of them all - the general election of 1964. The election was alleged to be neither free nor fair. All devices imaginable were said to have been used by the ruling parties in the regions to eliminate opponents. The Chairman of the Electoral Commission himself admitted there was proven irregularities. The President, Dr Nnamdi Azikiwe refused to appoint a Prime Minister in the light of these allegations. The President and the incumbent Prime Minister, Sir Abubakar Tafawa Balewa, were each seeking the support of the Armed Forces. This marked the first involvement of the Armed Forces in partisan politics. The President announced that he had appointed the incumbent Prime Minister, Sir Abubakar Tafawa Balewa; to form a broad based government. 10Balewa came from the north and the Igbos and Yorubas were constantly complaining about northern domination. Furthermore, there was an economic recession. By 1964, prices had risen by 15%, unemployment was rising and wages were well below average. The government responded by arresting Chief Awolowo, prime minister of the western region, which for a time seemed likely to break away from the federation. 11The same could not be said of the Western Region election of 1965. The rigging and irregularities in the election were alleged to be more brazen and more shameful. Law and order broke down completely leading to an almost complete state of anarchy. ...read more.

Furthermore, it can be seen that the colonial masters worsened the already existing situation by forcing the hostile states to come together with nothing in common apart from the name of their country. The British therefore compounded the already existing divisions that existed between the different tribes. As a result of the deepening of the already existing divisions, the stage was set for the civil war. The Nigerians could also be blamed to an extent for the breakout of then war. The ethnic problems that existed in Nigeria were not unique to them. A similar situation occurred throughout the continent. However, they failed to produce a leader who could unite them at independence. Other countries produced leaders, who despite the deep ethnic divisions managed to unite the country for example, Ghana under Kwame Nkrumah. Their leaders were however, based on tribal divisions. This also was a contributing factor to the eruption of the war. WORD COUNT: 3,898 SOURCE EVALUATION Peter Calvocoressi-World politics since 1945, Peter Calvocoressi is a renowned historian on twentieth century world history. He also a historian of distinction in the field of international relations. The source is one of the most comprehensive and up-to-date analyses of world history since the Second World War. Since this is the sixth edition, it is the most recent book and had access to new sources which were available.. Norman Lowe- Mastering Modern World History, Norman Lowe is a respected historian on the major topics of world history. The source was produced as a textbook for schools and colleges and also an introduction for a higher-level study of the subject. He had access to a variety of new information especially since the civil war was a recent one. Taking all this into consideration, the source is reliable. Alexander A. Madiebo The Nigerian Revolution and The Biafran War, Rtd Major General Alexander A. Madiebo was the commander of the Biafran army. The source was produced as an eyewitness account of the civil war in Biafra. As a result of it being written by a participant in a way his conclusions are sometimes subjective. ...read more.