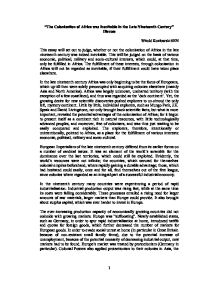 &quot;The Colonisation of Africa was Inevitable in the Late Nineteenth Century&quot; Discuss.

"The Colonisation of Africa was Inevitable in the Late Nineteenth Century" Discuss Witold Kozlowski 6EN This essay will set out to judge, whether or not the colonisation of Africa in the late nineteenth century was indeed inevitable. This will be judged on the basis of various economic, political, military and socio-cultural interests, which could, at that time, only be fulfilled in Africa. The fulfillment of these interests, through colonisation in Africa will not be regarded as inevitable, if their fulfillment could have taken place elsewhere. In the late nineteenth century Africa was only beginning to be the focus of Europeans, which up till then were solely preoccupied with acquiring colonies elsewhere (mainly Asia and North America). Africa was largely unknown, uncharted territory (with the exception of a few coastlines), and thus was regarded as the 'dark continent'. Yet, the growing desire for new scientific discoveries pushed explorers to un-shroud the only left, mystery continent. Little by little, individual explorers, such as Mungo Park, J.H. Speak and David Livingstone, not only brought back scientific facts, but what is more important, revealed the potential advantages of the colonisation of Africa; for it begun to present itself as a continent rich in natural resources, with little technologically advanced peoples, and moreover, free of colonisers, and was thus just waiting to be easily conquered and exploited. ...read more.

The colonisation of Africa was inevitable, not only because of economic reasons, but political ones, as well. Up to around 1870-80s the only uncontested nation in terms of world hegemony was Great Britain, which was solely interested in the expansion of its colonies, leaving continental Europe embroiled and focused on its own affairs. However, with the unification of Italy in 1861, largely due to Cavour and the unification of Germany in 1871 by Bismarck, territorial issues, which kept continental Europe uninterested in colonies, were resolved. Since then, the nation-wide German conscience (although with Bismarck's great reluctance), the empire-aspirant Italians and the isolated and humiliated French (during the Franco-Prussian War of 1870-1871 losing Alsace and Loraine) had put the acquiring of colonies as one of their top priorities. Owning colonies, at that time, was viewed as an ideal embodiment of a country's greatness and political power. Hence, in order to be counted with, on the world's political stage, a nation had to possess colonies (the perfect example being the small country of Belgium and Leopold II's Congo colony). Africa, being the only continent still untouched and undivided amongst European Colonial Powers, therefore presented itself as an obvious and single place adequate for the fulfillment of these interests of raising national prestige. By possessing colonies in Africa, the Germans, Italians and the French, with their boosted morals, could finally feel as 'great' and proud amongst other nations, and diminish (and thus evade social unrest) ...read more.

There was also the question of population emigration. France was resettling the ex-inhabitants of the German-occupied Alsace and Loraine to Algeria, in an attempt to stabilise this North African part of France. Great Britain, on the other hand, was rewarding retired soldiers with South African land. Nevertheless, this colonisation through emigration had an affect on certain coastal areas only, and would not have taken place if colonies had not been established before, and thus cannot be regarded as an inevitable colonisation process. A vital factor, which enabled the rapid colonisation of Africa, in the first place, was technological advancement of the late nineteenth century. Industrialisation brought about rapid advancements in transportation and communication, especially in the forms of steam navigation, railroads, and telegraphs. Medical advances were also key, especially medicines for tropical diseases. The development of malaria treatment enabled vast expanses of the tropics to be penetrated. Due to these advancements, European interests had finally been "let loose" onto Africa for fulfillment. In the result of all the factors mentioned and already discussed above (economic, political, military and socio-cultural) the colonisation of Africa was inevitable. Over the period of the last twenty years of the nineteenth century, virtually the whole of Africa had been colonised. In contrast to the Americas, Asia and Australia, Africa had been dominated by a larger number of Colonial Powers: Great Britain, France, Germany, Italy, Belgium, Portugal, and Spain. This reflected the new political and economic situation in Europe itself in the late nineteenth century. 1 ...read more.